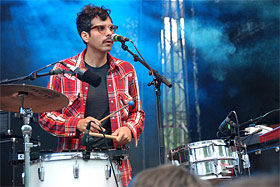 Well well. A taster from Why?’s forthcoming album Eskimo Snow appeared today and as Pitchfork noted there’s hardly a glimpse of the band’s leftfield rap sound present. This is pretty much a straight-up sweet piano-led tune albeit with Yoni Wolf’s unique and artful lyrical delivery intact.

Eskimo Snow is out through Anticon on September 22th (so 18th here probably). The album was recorded at the same time as last year’s brilliant Alopecia.

Why? – The Blackest Purse

Win a copy of Veckatimest