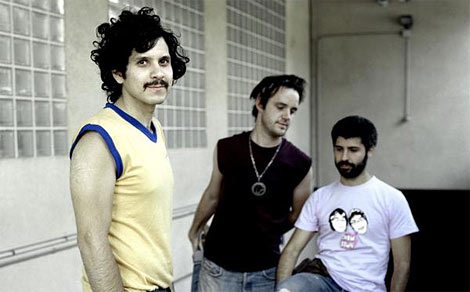 Bobby tipped me off recently that Why? were playing here in April 26th in Andrew’s Lane Theatre so I checked out the latest album Alopecia out this week.

If you were taken by Subtle’s For Hero:For Fool last year, this album roughly translates as this year’s model update. Taking in hip-hop confessional lyrical styles with an indie band approach to instrumentation, Alopecia is a less cryptic, more secular version of the aforemented Subtle. Doseone and Why? singer/rapper Joni Wolf have recorded together before under the monikers cLOUDDEAD and Greenthink. The parallels are plenty with both hailing from Oakland, California, both recording for Anticon, and both sharing a singular whiny timbre.

Alopecia is an emotionally charged musical landscape which switches effortlessly between genres, with lyrics that jump out at even the most passive listener.
For Example:

“I sleep on my back ‘coz it’s good for the spine and coffin rehearsal / I know a psychic who reads her own palm and her findings are personal”. – “Fatalistic Palmistry”

“In Berlin I saw two men fuck in a dark corner of a basketball court / Just a slight jingle of pocket change pulsing “. – “The Hollows”

Some of the music flirts with indie band generics but the hooks, spoken or sung are extremely memorable. I’m still digesting the album at the moment, but i’m thoroughly enjoying the world created here and recommend you do too. Get a headstart.

Get to the Chopper! Aagh! The Predator Rap