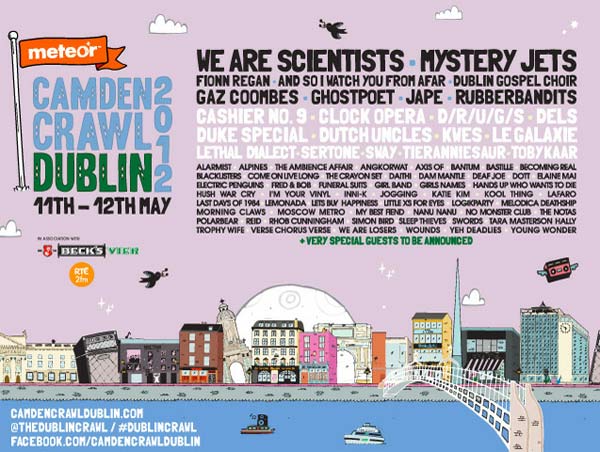 Next weekend, Camden Crawl will take place for the first time outside of its London home in Dublin on Friday May 11th and Saturday May 12th. The city festival is taking over 15 venues across the city with around 100 bands both Irish and international, including Ghostpoet, And So I Watch You From Afar, Jape, Clock Opera, Dels, We Are Scientists, Mystery Jets, Gaz Coombes, Dam Mantle, Rubberbandits, Kwes, Le Galaxie, SertOne, Little Exes For Eyes, Bastille, My Best Fiend, Funeral Suits, Young Wonder, Hush War Cry, D/R/U/G/S, Lemonada, Toby Kaar and lots more as illustrated above all playing.

The idea for the festival is you turn up on the day, receive your timetable and get exploring around the venues. Times will not be known until the day but I can tell you that I will be hosting The Grand Social on Friday night with sets from Young Wonder, Dam Mantle, Trophy Wife and Little Xs for Eyes (also hosting in Camden Crawl London this Sunday in The Monarch with Jim Carroll featuring Charli XCX, Disclosure, Cymbals and Willy Moon).

I’ve got four pairs of tickets to giveaway to 4 readers and their plus ones, thanks to Beck’s Vier.

To be in the draw, head over to this Facebook photo, give this page a like and tell me who the musical artist illustrated by 400 Facts is via email to [email protected] with your full name. Competition closes on Tuesday at 6pm.

If you don’t end up winning, tickets are a reasonable €25 per day or €40 for a weekend plus fees.

Have a listen to the Camden Crawl Dublin mixtapes: