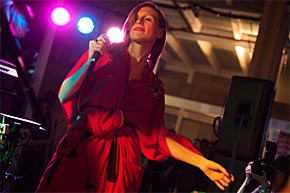 Dave Rawkblog’s 2010 Bands You Can Ignore list is a fine example of blog aggravation. Containing a list of 2010 bands you don’t need to hear before making a year-end list, it was bound to stir up some strong opinion. There are certainly a few bands on that list that personally I’d never tell you to ignore. Foals? Glasser? Both have made brilliant albums this year. LCD Soundsystem? Tanlines? Please. Their Settings EP is one of the best short-form releases I’ve heard in the last 10 or so months.

Dave’s choices are his personal opinion and as much as the internet tells you otherwise, you have to respect that. There is an explanation. What concerns me though, is the Rawkblog criteria for the list. These artists are not bad just not worth your time or as he put it not special. Are we demanding brilliance and uniqueness from the start now? Is there no room for musical growth anymore? Or is instant dismissal a better option?


Let’s take a sample of acts on that list : Zola Jesus, How to Dress Well, Sun Airway, Active Child, Dom, CEO, Teengirl Fantasy and The Golden Filter. Most of these bands are very early in their potential careers. Zola Jesus may have been making music since she was 16 but she’s really only starting to come into her own now. Sun Airway are about to release their debut album Nocturne of Exploded Crystal Chandelier in the States. They’ve already produced one of my favourite songs of 2010 – ‘Waiting on You’. Active Child’s music so far has been intriguing, maybe hard to love but there’s something there. The Golden Filter too have had much to recommend them despite an occasionally lacklustre debut album. How To Dress Well is still one to keep an eye on. I’ve only heard one Dom song. Each of the bands on the Rawkblog list are doing something right.

Ultimately though, it doesn’t matter who appears on the list. It suggests we ignore these artists as they haven’t made anything truly great or contributed anything special to music yet. That worries me. The hyper-acceleration of music culture and consumption worries me. The churnover (hat tip – Sean Adams for the phrase) of new bands worries me and I’m a music blogger. Recently, I’ve consciously attempted to stem the flow of new music coming my way: the constant barrage of links and songs to check out. The pressure to do so. Lately, I have found a balance between listening to lots of new music and appreciating stuff I already like. I can’t live my life devouring buzz bands, shitting them out the other side and moving on. That’s just candy. Something of no value which fills up the time and space. There’s no nutrition. You only appreciate the short sugar rush. I want to be sure I’m able to listen to that music in six months, a year, five years.

That’s what Dave’s list attempts to do to a certain degree but that is why that list of bands to ignore rankles with me. Part of the fun of music discovery is seeing a band’s creativity skyrocket to the point where they become special. Sometimes, there is only one or two good songs at the start. Sometimes, you just have a feeling about a band that makes you want to stick around. Sure, more often that not, the initial excitement fades and you move on to something else. That’s OK. But at the very least, it’s something you should experience yourself. I’d hate to think that someone who reads that list is skipping on Glasser if my enjoyment of her album is anything to go by. Who knows what these artists will do in the near future? Isn’t that a part of the FUN? You certainly shouldn’t dismiss a band completely if they operate in your sphere of taste as clearly Dave’s list does with him. Except Free Energy – I’m sure we can all agree they totally suck…

Video: Glasser – ‘Treasury of We’ (live)