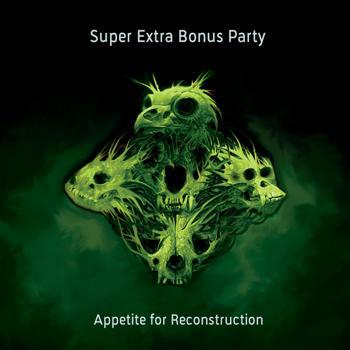 The Bonus Party boys are putting on a party (fittingly) to celebrate the remix album of their debut which is called Appetite for Reconstruction and is out on Monday via free download. The gig is taking place in Andrew’s Lane tomorrow (Friday 10th) from 8pm til 2.30am. A mammoth night of music and visuals is lined up with live sets from Nouveaunoise, Ikeaboy, The Vinny Club, R.S.A.G, Caipirinha Band from Brazil, Super Extra Bonus Party and DJ sets from T-Woc, Richie !Kaboogie.

Should be a cracker of a night and the cheap €10 admission includes the first 300 in the door (tickets on door) get a free limited addition CD copy of the album that’s not available anywhere outside this gig. The reason for that is that the album will be available from superextrabonusparty.com as a free digital download from Monday 13th in lossy MP3 128/320, AAC, Ogg Vorbis and lossless formats AIFF and FLAC.

I haven’t even got to the album yet which contains 17 remixes from Decal, Deep Burial, DeadFader, Thalamus, Jape, Cadence Weapon, Ikeaboy, Ed Devane, Prince Kong, Friction=Fire, Nouveaunoise, The Vinny Club, Ambulance, T-Woc, Judas da Bimboy and 2-Bit. Also, the cover was originally conceived to take the direct piss of this, but became a wholly different beast thanks to the artwork of Dave King.

The night and the release is a celebration in honour of the remixers and to begin Nouveaunoise have made a succinct 19 minute mix of tunes which features tracks from Alan Braxe and Fred Falke, Eddie Bo, Jackson 5, Erykah Badu, Lords of the underground and more. Tracklisting after the jump.