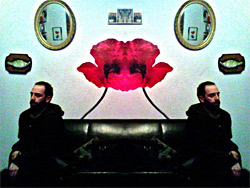 Introducing: The Hundred In The Hands

Last week I picked my top five Irish records so far this year and among them was Season of The Sparks the fifth album from Adrian Crowley. The album is released today and is a real step up from his already impressive fourth release Long Distance Swimmer.

Much of the album eschews the singer-songwriter with an acoustic guitar standard and replaces it with much more amibitious fare taking in swirling organ sounds, piano, atmospherics, rich imagery and a baritone voice distilled with confidence that has come out of solid years of plugging away, just doing your thing. ‘Summer Haze Parade’ is a lovely graceful way to start an album, the yearning instrumentation of ‘The Beekeeper’s Wife’ collectively transcends the humble Adrian Crowley of yore and another bee-related song, an Ivor Cutler cover – ‘Squeeze Bees’ is a floating idiosyncratic tale. The sublime ‘Horses Like to Dream’ confirms that Season of the Sparks is Mr. Crowley’s best album yet.

This new found plateau in craft also translates to his live performance. At his album launch backed by three-quarters of Halfset, Adrian delivered stirring and assurred renditions of songs new and old. See for yourself when Adrian plays an instore today in Road Records at 5.30pm. Also look out for a Daniel Johnson 8-track tribute album he recorded with James Yorkston recently.

Here’s the lead single ‘The Wishing Seat’ available here for free one week only (time up) before release on May 22nd.

Introducing: The Hundred In The Hands