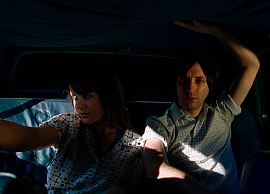 Yes, it’s yet another band from that NY borough to kick off our post-Bank Holiday week. ‘Dressed in Dresden’ has a similar chord progression to ‘Clash City Rockers’ but this is very much a more modern sound drawing from peers in their vicinity like LCD Soundsystem and Telepathe. With added disco-funk and a nod to the post-punk of the city’s past (and still future I guess).

Jason and Eleanore make up The Hundred In The Hands: Jason formerly of The Boggs and Eleanore appeared on TV on the Radio’s Dear Science – providing backing vocals on ‘Lovers Day’. This is their awesome debut single. ‘Dressed in Dresden’ is out now with a tasty ‘Undressed in Dresden’ remix by DFA affiliated Jacques Renault – Download both songs from their THITH ZINE.

The Hundred In The Hands – Dressed in Dresden

Incidentially, their site has a music blog vibe to it and I’m digging the Wild Yaks ‘Wish I had a Whip’ as recommended by the band.

Adrian Crowley – Season of the Sparks