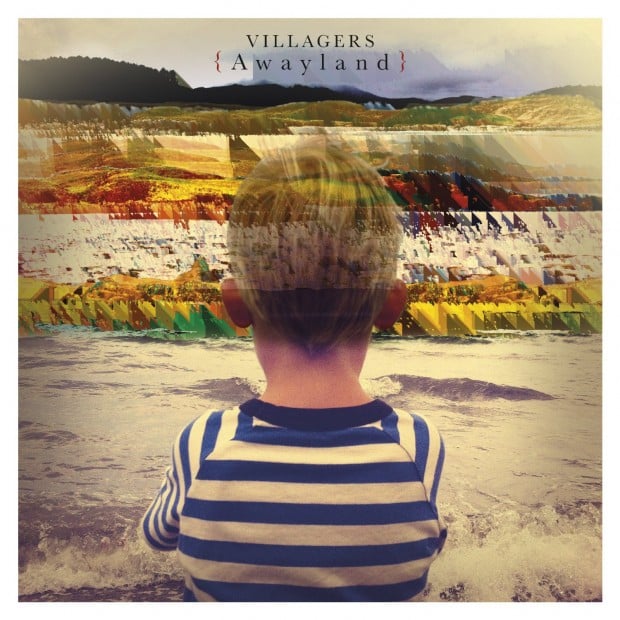 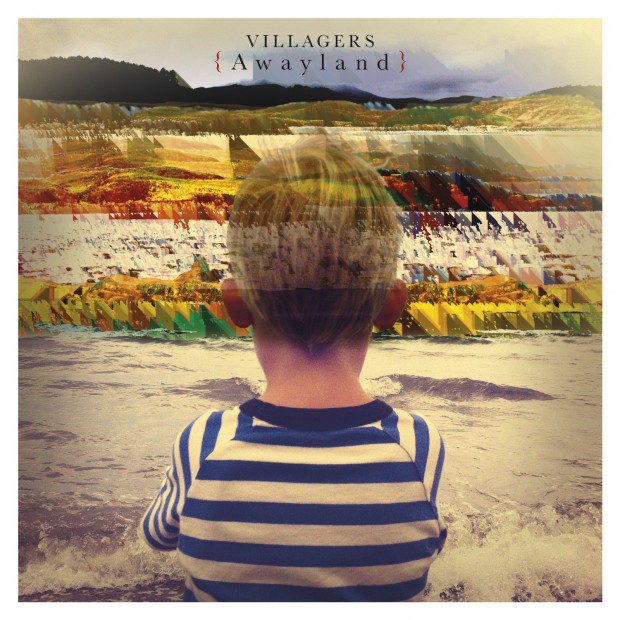 Conor O’Brien’s pedigree is already well-established. He represents the considerate, considerable poetic songwriter. He draws you in with his literary choice of words, his storytelling. Vowels and phrases are enunciated with a quiet power. I’ve written before how lyrics are generally a secondary concern for me but Conor draws me in, holding me rapt in sound and words.

On {Awayland}, Villagers‘ second album, released today, what’s on offer is more complex than first album Becoming A Jackal. What began as a solo project, begat a band, begat tours and acclaim. With expectation comes energy and a band required to play the songs full-time. The first album was Conor’s ideas. {Awayland} is made by Conor and the band members Cormac Curran (piano/strings), Danny Snow (bass), James Byrne (drums) and Tommy McLaughlin (guitar and album producer). As a result, musically, it’s a more dynamic and interesting album, with everyone creatively involved and creating something more expansive.

The closer collaboration can be heard throughout in the crashing cymbals and soaring strings of ‘Earthly Pleasure’ to Curran’s piano propulsion on ‘Nothing Arrived’ to the Radiohead-esque bassline of ‘Passing A Message’. The doleful strings of ‘Grateful Song’ are begging to lift off into a sunset of epic proportions and when they do, it’s a release of beauty. ‘The Waves’ may have been a bit of a false flag, despite O’Brien using lots of electronic textures in album demos, much of it didn’t make it to the album save for the morse-code synthline and tumultuous ambition of that song. As a result, some may be disappointed by that promise, but while the instrumentation is rooted in traditional, the cohesive glue that the band brings is a grandeur previously fleetingly glimpsed at.

Like the recent album from touring mates Grizzly Bear, the lyrical references to the natural world are plentiful. The plaintive ‘My Lighthouse’ has a “violent moonlight searching the tide”, ‘Nothing Arrived’ opens with “Savanna scatters and the seabird sings”, ‘Passing A Message’ references evolution “Baby steps from the ocean / feather trails to the sea” while ‘The Waves’ engulfs “the coastal plane, the fear and the guilt and the pain” with the sonic warning “and if you don’t agree / You better get back inside your cave / cause we’re all dancin’ with the waves.”

As ever though with O’ Brien, it’s those simply constructed lines that repeat with the listener of which ‘Earthly Pleasure’ is perhaps the richest on the album. A story that starts with the protagonist “naked on the toilet with a toothbrush in his mouth / when he suddenly acquired an overwhelming sense of doubt,” before being whisked away to the early 19th century to rant in front of a queen: “Lucifer is in our court; Beelzebub is in our banks.”

Throughout, those simple wordy treasures are largely matched with worldly textures. {Awayland} is a trove of confident and carefully crafted music and lyrics. We’ll be very fortunate if there as many albums of this quality released this year.

Listen to the album on Deezer or Spotify.