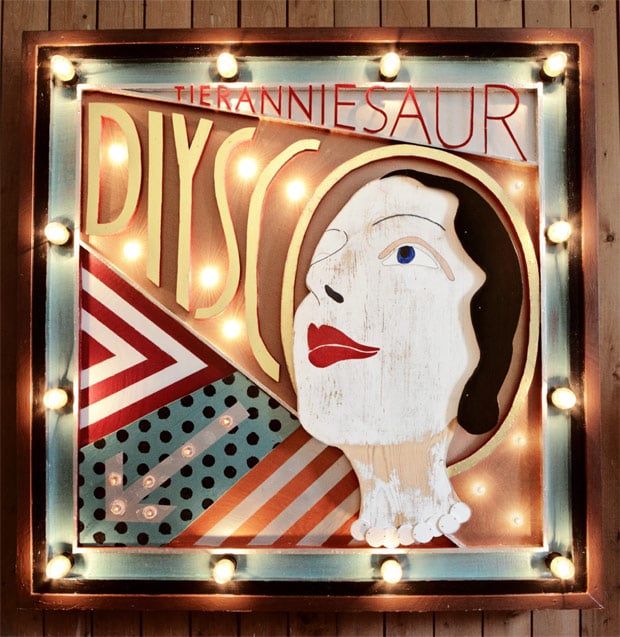 Tieranniesaur are back with a second album of disco indie jams. Listen to it here.

Having spent the last two years bringing their block-rocking lo-fi disco indie tunes around Ireland, Tieranniesaur have regrouped for another round of “DIYSCO”.

As you would expect, DIYSCO is a collection of 12 upbeat tracks lead by the voice of Annie Tierney which add more of a forceful edge to the band’s sound. The title track and first single is a messy but endearing first representation of an album which reveals subtle expressions on the disco-indie format throughout on the starry-eyed alt-pop of ‘Maro Rides The Wave’, the synth-funk of ‘Chill Bros’, the good-time horn-assisted and brilliantly-titled ‘Looking Up The Skirts Of Giants’, the wavey-synth and strings rabbit-hole of ‘Horses With Melting Eyes’, the loose-rock glitter of ‘No Big Deal’ and the sweetness of ‘The Changeling’.

The outcome is a fine gathering of disco indie, as affecting and enjoyable as album one but with distinct indentity of its own. Come dance at the DIYSCO.

Tieranniesaur launch their album this Saturday May 10th in Whelan’s with support from Cave Ghosts. They are playing shows in Cork and Galway too this week. The album will be out on Popical Island on 12″ vinyl and digital download while a UK release comes out through Soft Power Records. The artwork is by, the awesome, M&E.

Listen to Ginnels – the debut album from GPO’s Mark Chester