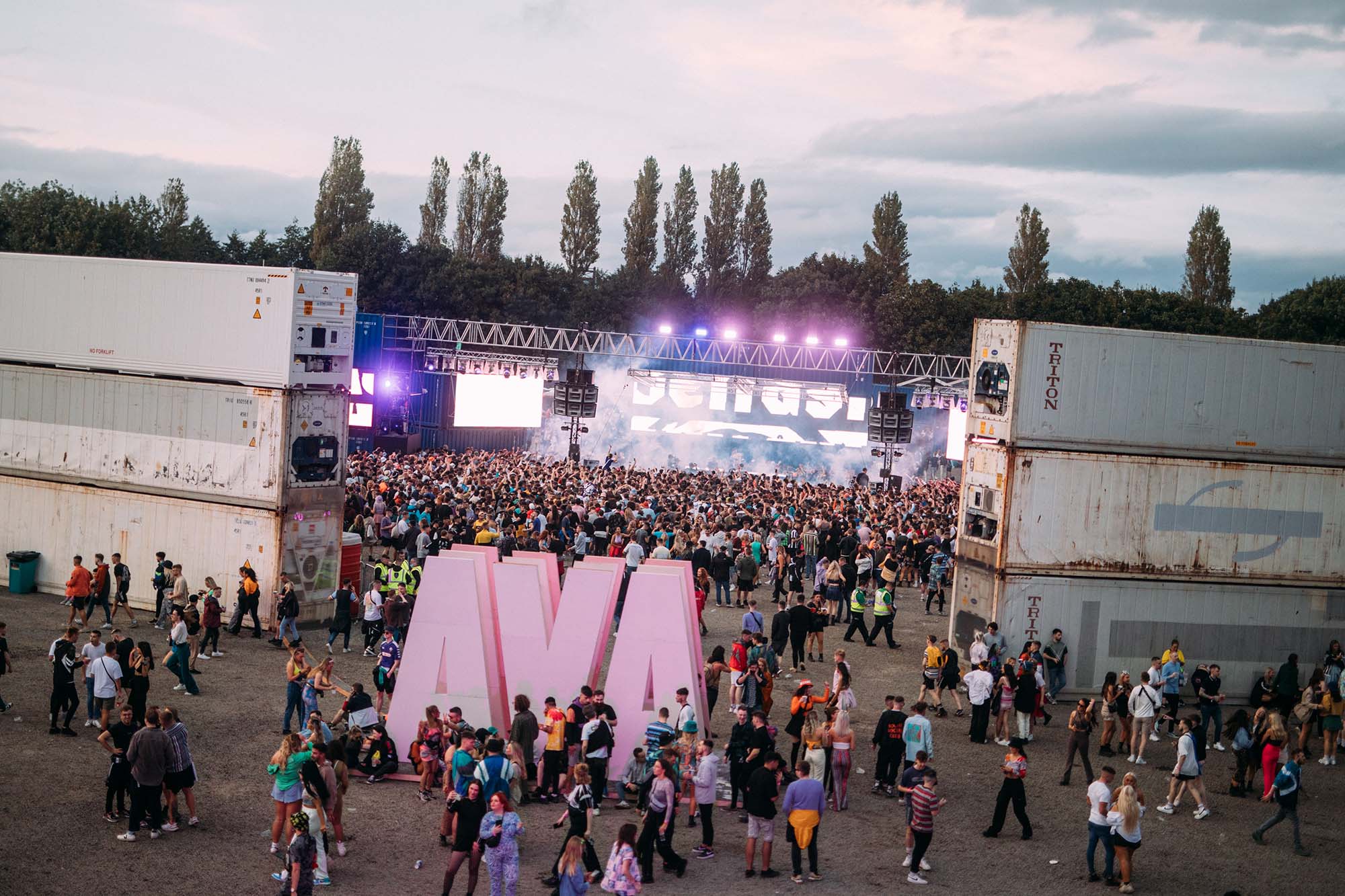 The sight that greeted seasoned festival goers who stepped through the gate at Boucher Fields for this year’s AVA Festival last weekend was both familiar and unfamiliar.

After 18 months of no gigs, clubs or festivals, suddenly being among thousands of people milling around a festival site was heartwarming and strange. It was like time travelling to the future except the future is now.

Restrictions have eased, and while Northern Ireland still has a way to go in terms of indoor gigs, outdoor events are operating at full capacity. AVA Festival has already established itself as a discerning European dance event with a global cultural cachet and Boiler Room’s nod of approval for local and international dance and electronic artists.

Expanding its genre reach to encompass R&B, rap and hip-hop for this year’s event, gives AVA further weight on the festival circuit.

The strangeness of actually being back at a festival didn’t take long to dissipate. AVA was also one of the first proper actual dance festivals back on this island, and the giddiness and joy was palpable over the two days. People were so happy to in a communal space once more.

Boucher Fields are set in an industrial estate on the outskirts of Belfast (very walkable in 45 minutes), and shows cities like Dublin, which struggle with spaces for club experiences what could be possible, as things reopen.

The site itself for this year’s AVA is nicely contained, literally. The main stage, The Surround, places shipping containers around its DJ booth (with room behind the booth for the customary Boiler Room crowd experience), lighting and wide video screens flanking the DJs. It’s not called AVA (Audio Visual Art) for nothing, as the organisers ensure that sound and vision is paramount to the festival’s offering.

The Nomadic stage puts a full soundsystem and light experience under a covered roof in case of rain (none was forthcoming), The Grasses was a tented space where live acts and DJs could perform, and there was a trippy tent for people to relax in, or dance to uplifting house music, whatever you’re having yourself.

Like with any festival, no one person’s experience can encompass the entire festival but we tried our best. Over the weekend, there were great sets from Helena Hauff, Sunil Sharpe, FJAAK, KiNK, Kojaque, Hammer, Timmy Stewart and JMX and lots more. Many of which were broadcast on Boiler Room’s Youtube Channel and you can watch back here or on AVA’s Youtube.

There was even an appearance from Jullian Simmons, the Ulster TV personality and legend who introduced Swoose’s set on Saturday.

Being at AVA Festival 2021 was a tonic, a rejuvenation and a reconfirmation of all that was missing in the last 18 months – the importance of gathering, community socialising, casually meeting people, brief conversations with strangers, a cold festival pint, the thrill of a tune drop and the excitement of dancing with others. AVA had a lot to live up to and it delivered that and more.

Below are five experiences from this year’s AVA that I will take with me into the future.

There are no better men I could imagine spending the end of a first evening back at a festival with than Glasgow legends Optimo. Their eclectic sets, and legendary Sunday club, are an inspiration for many.

You would expect JD and Twitch to read the room and they delivered a set packed with their trademark variety from across the spectrum while not being afraid to play the big well-known tracks that everyone, penned up for so long, would go nuts for. So there was a house a cappella mashup of Robin S’ ‘Show Me Love’, The Prodigy’s ‘Out of Space’ and a marquee closer in ABBA’s ‘Lay All Your Love On Me’.

The song is a personal DJ favourite – often dropped at the end of a DJ set at Lumo when things feel right – and the singalong reaction of the song at the close of Friday evening was the ultimate shaking off of the pandemic, and the release we all craved. Glorious.

There aren’t many DJs who can match Jayda G for sheer exuberance in performance when they play. The Canadian released one of the most resonating club tracks of last year in ‘Both Of Us’, and a return to dancefloors meant Jayda G could share the song’s sparkling emotion and slowed-down break with AVA, alongside disco and house moving tracks like her Dua Lipa remix and Sister Sledge’s ‘Got To Love Somebody Today’.

Last summer, Dublin singer Gemma Dunleavy debuted a song dedicated to the inner city Dublin community around Sheriff Street that she grew up with on ‘Up De Flats’.

In the year and a bit since, the song, and Gemma’s stature as an artist has captured a wider imagination and AVA was the first opportunity for a big crowd to see Gemma play in a festival setting since. Gemma is a seasoned performer as it is, so she had no problem rising to The Grasses stage and delivering a set aided by Róisín Berkley on harp which drew from her solo material, her collaborations with producer Murlo and covers of ‘No Scrubs’ and ‘Cheatin’ but a set like this was made for a long overdue singalong to the refrain of “we’ll be shouting ‘up de flats’ from the rooftops.” Magic.

It’s an incredibly difficult thing to place but some DJs imbue their entire personality in the records they play. How they move can dictate a crowd, and the Dutch DJ Carista embodies both those characteristics with her Boiler Room-streamed set at AVA on Saturday afternoon.

It was an amped up hour of percussive techno that rolled and lifted between fast-paced hypnotic passages and tightly-wound basslines with an electro raveyness.

When not advocating for cultural and licensing changes alongside Sunil Sharpe for Give Us The Night, Robbie Kitt knows how to bring some to a festival stage.

Sunil and Robbie played AVA at the same closing time on Saturday and both offered different flavours. Sunil is a European techno powerhouse bringing old-fashioned vinyl mixing to a high art, while Kitt either produces melodic electronic music or DJs tracks at a higher tempo than his originals.

Kitt’s set to close The Grasses stage was a fizzy mix of original rave bangers and classics from Lisa Lashes to Hackney Parrot to a Madonna ‘Like A Virgin’ edit to ‘Lock and Load’ and perhaps my ultimate AVA Festival highlight drop – the 1999 dance track ‘Synths and Strings’ from Yomanda.

Robbie said his entire set was what he would have played at the now defunct Jigsaw in Dublin, and these high tempo 90s club tracks recontextualised for AVA were the perfect closing release to a glorious weekend.

Tickets for AVA 2022 are on sale next week

AVA Festival 2022 tickets are on sale Wednesday October 6th if you sign up here.