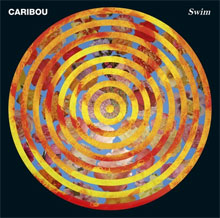 Dan Snaith’s last album as Caribou, Andorra was described here as “nine songs of beautifully crafted melodious vaporous pop”. It looks like the followup Swim out on City Slang on the 16th of April (19th – UK,Europe / 20th – US) is a massive diversion from that sound.

Judging by the opener and free download track from the album, ‘Odessa’, Snaith is on a dance music tip. There are ravey bits and lots of funky percussion underneath it all. Luke Lalonde of Born Ruffians appears on a track from Swim as does a quartet of Toronto jazz musicians. Snaith says the album is: “Dance music that sounds like it’s made out of water rather than made out of metallic stuff like most dance music does.” Exciting. Tour dates are also forthcoming.