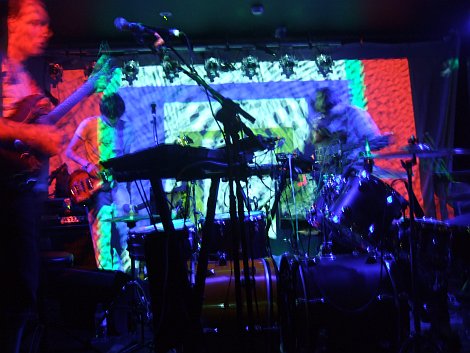 The Go! Team, Cadence Weapon and the marketing sharks

After missing out on previous Caribou shows I finally caught up with Dan Snaith’s live show last night. I missed the show in September and also a few years ago in the Red Box (when they were then known as Manitoba) due to a no show support slot to Primal Scream. Andorra is one of my albums of the year so it couldn’t have come at a better time.

Last night’s show was filled with Andorra material and was all the better for it. On stage, the two drummers were setup to the forefront while the guitarist and bassist lounged at the back. Behind them psychedelic visuals reinforced the trippy nature of the live Caribou show.

Dan Snaith is not much of a frontman but he wouldn’t claim to be. His vocal are deliberately low in the mix lending to the 60s psychedelic vibe. It was all about the drums anyhow. Andorra has some of the best drumming on an album this year so it was a delight to see the fantastic touring drummer thump the skins with such force to a click track without problem. Snaith would join in when it was warranted which was often and the two bashed the unmistakable rhythms in unison. Two drummers NEVER fails to impress especially when they are both feet away from the audience. See video of “After Hours” below for an example.

When not playing drums, Snaith played some guitar, a synth, a recorder and a xylophone. They also played some older stuff including a personal favourite “Yeti”. If you are in Belfast tonight, they play the Limelight. GO!

A note to those attending The Go! Team in Tripod

The Go! Team, Cadence Weapon and the marketing sharks