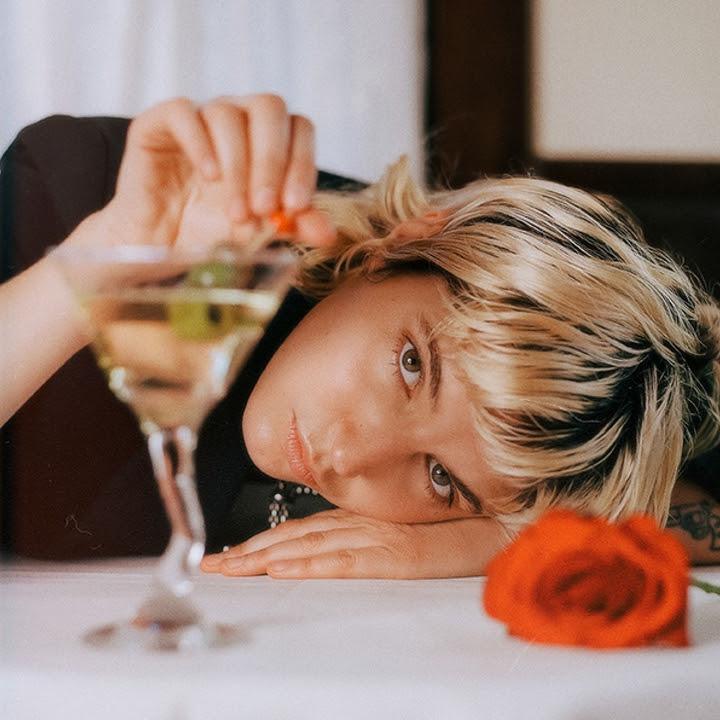 I was a big fan of Caroline Rose’s 2018 album Loner, an album fro  the self-described “queer feminist” with a dark-edged manic and millennial modern pop, drawing on indie-rock, surf music, synth hooks and bright production.

Rose followed that up with the glitzier, pop electronic Superstar in 2020 with bops like ‘Feel The Way I Want’.

Today, Rose has announced a new one, The Art of Forgetting will be released March 24th and she released the heartbreak song ‘Miami’ to coincide with a bunch of European and UK tour dates including Dublin’s Whelan’s on June 1st.

There are shows also in Manchester, London, Glasgow and Bristol and links here.

About Caroline Rose – The Art Of Forgetting

“Sometimes you’ve got to express yourself because if you don’t you’ll explode,” says songwriter/producer Caroline Rose of their latest album, The Art of Forgetting. “…and i felt like i was going to explode.”

After a series of heartbreaking events, Rose had no desire to make a statement, let alone make a new album. It was a time of contemplation and transformation, a time to slow down. what transpired was what the artist considers a gradual union of reconnection and growth. “I was writing songs the way that i used to when i was a kid. it was more like therapy, just sitting down on my bed and writing about what I was feeling. it sounds so simple but i had really gotten away from that.” Dozens of songs followed and a narrative became clear. “It all happened very organically. I wasn’t ambitious. there weren’t any difficulties like most of my other records have had. This one just sort of appeared and seemed to know exactly what it needed to be.”

The Art of Forgetting is a pivotal release for Rose––an artist whose wit and satirical storytelling have made them a name in the indie music scene. it’s an album teeming with raw, intense emotion. layers of vocal arrangements from Balkan-influenced yawps to Gregorian autotune choirs, acoustic instrumentation chopped and mangled like a glitching memory, and dreamlike synths push and pull to create a hugely dynamic soundscape. Lyrically, the album includes the type of confessional honesty we’ve only caught glimpses of in rose’s previous work. “i’ve shied away from being very confessional in the past because i’ve always felt that other artists have already carved out that path and are very good at it. I’m a theater kid, i love the drama. my writing style really piggy-backs off the southern Gothics and southern storytellers in my family, who have always used exaggeration to great effect.”

The album begins with a clenched fist, with a narrator who seems to know who they are only in regard to someone else, or not at all. “I am your love, i am your lover, i am your friend,” rose says in the opening track “love / lover / friend.” in “rebirth” the narrator is simply lost––an orphan, a common man, an unknown in search of comfort. “if that was me then, then who am i now?” Rose questions in “the doldrums,” an eerie track reminiscent of both Carnival des Animaux and Vespertine-era bjork. over the course of the album the author searches for something, anything, with which to ease their pain––a mother’s womb, the kiss of someone new, even death.

Amidst themes of regret and grief, loss and change, shame and the inevitability of pain, rose’s impish humor pops up unexpectedly. “Stockholm syndrome,” “tell me what you want,” and “love song for myself” showcase the kind of dark comedy with which we’ve become familiar in their catalog, fusing upbeat melodies with oft-hilariously deflating lyrics. “iId like to think i’m self-aware enough to know that even when i’m close to rock bottom the view is a comic-tragedy. the biggest difference between this album and my others is i just didn’t have any sort of guard up this time. everything i’ve said on this record is exactly what i would, and did, tell my therapist.”

No doubt, it gets personal. Rose’s actual therapist, jill, has a song named after her in “Jill says”—a sweeping arrangement of floral pianos and cinematic strings. in “Miami,” an acoustic-centered track whose chorus of squealing guitars and bombastic drums seems to all but explode out of the speakers, rose pulls directly from an intimate conversation with their mother: “my mom always said never victimize yourself | you’ve got to be strong, you’ve got to protect yourself | y’know, your father and i are in the last stage of our lives, so for god’s sake no more talk of how you imagine dying.” multiple voicemails from rose’s grandmother, mee maw, are given their own respective moments throughout the album, offering moments of lightness amidst an otherwise heart-rending story of a person who has forgotten, and is perhaps re-learning, how to love themselves.

Memory runs like a current throughout the art of forgetting. prompted by a difficult breakup, rose began a deep-dive inward, unknowingly digging up long-buried experiences from their childhood. “i was addressing all these painful memories from a recent relationship that meant

So much to me, trying to learn from them, but then in the process some even more painful memories would bubble to the surface from when i was a kid. i realized my mind had voluntarily forgotten these traumatic experiences as a means of survival. all the while, i was getting these calls every day from my grandma, who was clearly losing her memory. it got me thinking about all the different ways memory shows up throughout our lives. it can feel like a curse or be wielded as a tool. ‘the art of forgetting’ can mean so many different things.”

With this in mind, Rose produced the album using devices and media that embody the characteristics of fading or faulty memories. “i gravitated toward anything that decays or changes with time––wooden and string instruments, voices, tape, granular synthesis that separates audio into tiny little fragments. i knew i wanted to have songs that would feel complete even if they were played stripped down, so i began by recording the basic layers in my home studio. from there it was about a year of experimenting with those recordings both at home and in a couple other studios––chopping them up into loops and smears, creating modular percussion, and ultimately building any additional parts around them. i thought it was important that any experimentation was done using the songs in their most basic form, so it would feel kind of like a game of telephone with those original recordings.”

Though the path back to self-love is clunky, by the final track, “where do i go from here?,” rose is no longer grasping. “pick yourself up, babe, you’re gonna be fine | take in a deep breath | quit wasting your time | ‘cause everything you love, it’s all gonna die | so pay all your respects and say your goodbyes | now go out and start living the rest of your life.” albeit begrudgingly, Rose is giving in and letting go. “every time i make an album i’ll come out of it learning a lot about myself. on this one i look back and see the healing of a wound. i feel like a new version of myself. i think one for the better.”