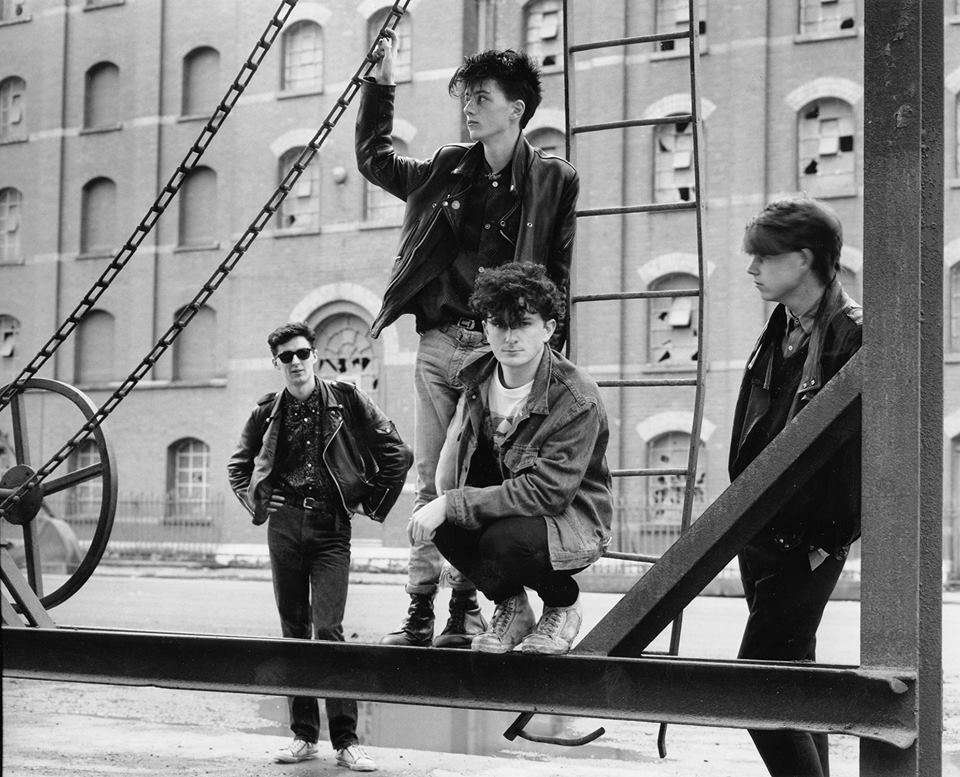 When conversations are held about the wider music picture in Ireland in the 1980s, talk invariably goes to what was happening post-punk in Dublin, and the many creative paths that emerged from those few years. Elsewhere in the country, however, the story was… slightly different.

The mid-eighties were brutal to Cork city, and while the Arcadia Ballroom and other venues around the city played home to a buoyant scene at the decade’s outset, the economic picture amid a slew of factory closures added to the decade’s emigration problem, and sent a lot of musicians across the water.

Among the bands synonymous with angular, awkward noises in Cork City were Urban Blitz, a four-piece that featured on the legendary Kaught at the Kampus live split-EP (which was Irish indie powerhouse Reekus Records’ maiden voyage). Eamonn over at irishrock.org points to this band’s demise as the beginning of Cypress, Mine!, a four-piece that continued in a loud, angry vein, but featured a far more pronounced pop streak that set them apart, falling somewhere between the Smiths’ earnestness and Hüsker Dü’s lean, powerful aggro.

The resultant music would help give voice to the frustrations of young Corkonians of the time, as recounted by The Blackpool Sentinel lads in recent times.

Emerging in earnest in 1985, the band first came to wider attention around the city while on the bill for the Lark by the Lee one-dayer, presented by RTÉ Radio 2 and surprise-headlined by promising young Dubliners U2. From there, Irish & UK touring beckoned, including supports for Echo and the Bunnymen, as well as appearances on RTÉ’s TV GAGA (streaming below) and after a steady trickle of demos, signing with Dublin label SOLID.

The latter relationship resulted in a pair of singles; ‘In the Big House’ and  ‘Justine’, before the release of critically-acclaimed debut long-player, Exit, Trashtown, in 1987, followed by mainstream hit ‘Sugar Beet God’. The former remains an impressive achievement, a no-nonsense collection of indie-pop bijoux from the heart of the second city that proudly sports a sound and knack for songcraft that rivals anything else coming out of the UK or the US at that time, in retrospect. The latter gained serious pop traction at home, playlisted by Larry Gogan for daytime airings on Radio 2 and even covered in RTÉ’s Young People’s studio on a regular basis by a pair of aliens calling themselves Zig and Zag, in the early days of The Den.

But by 1989, the lads had lost the grá, frustrated by the lack of progress in getting onto the larger stage, the band had decided to call it a day. Speaking recently to Cork arts scribe Ellie O’Byrne in the Examiner, singer Ciarán O’Tuama says there was no real acrimony behind the decision: “I suppose, we got bored of the whole thing… we were in talks with people, but I remember just getting frustrated that it wasn’t happening. We just kind of went our separate ways; there were no hard feelings, as such.”

The intermittent years saw the band’s members further become synonymous with the city in different ways. Guitarist Ian Olney would go on to join Dublin indie trio Power of Dreams, be part of irreverent supergroup Dancing Bastards from Hell and play with another Leeside institution, The Sultans of Ping. His current band, alt-country outfit Cat Meat, also features former Cypress drummer Mark Healy. O’Tuama reverted to his prior passion of photography, and aside from his work in Dublin as a graphic designer, is reuploading dozens of his slices of eighties Cork life to social media on his Used ToBe page, stark reminder of the city’s character and endurance. Bassist Skoda, on the other hand, is one of the city’s big foodies, having a hand in Café Gusto and the Liberty Grill, both on the student superhighway of Washington Street, the latter of which is a handy spot for vegan fare if you can get a table.

Recent years have seen demand for the band’s records rocket: singles change hands for up to €150, and ‘Exit Trashtown’ for upwards of €500. Demand clearly exists, and on the thirtieth anniversary of the album’s release, the band have put together a comprehensive package of extras. Included are a number of unreleased demos, as well as B-sides and standalone singles in an odds-and-sods collection called In Pieces, the second LP of the double-disc set released via Spanish reissue specialists Pretty Olivia. None of the usual fare that accompanies reissues and anniversaries for bands in recent years has been announced, but even if this is the bottom line under a well-loved band, it’s a collection of a body of work that will continue to stand the test of time.

Exit Trashtown / In Pieces by Cypress, mine!

‘Exit Trashtown/In Pieces’ is streaming above, and available on double 12″ from Pretty Olivia on Bandcamp and BigCartel. Many thanks to The Blackpool Sentinel and Irishrock.org for providing historical notes and info.

Bitch Falcon’s new song ‘Of Heart’ is a live favourite