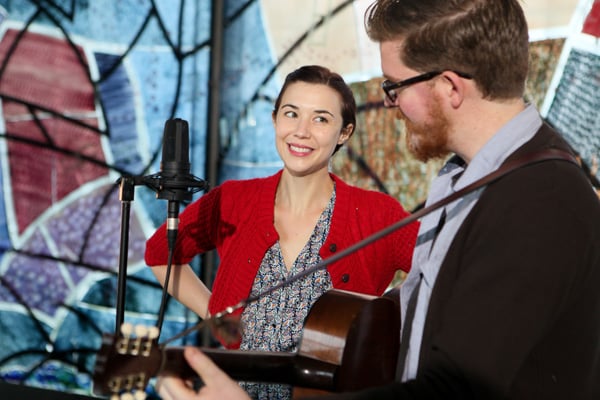 A rain-soaked day and night means that there is scant little else to do than explore Dingle town’s fine pubs. That means visiting establishments like Foxy John’s which doubles as a hardware and bike shop, Currans which does a nice line of men’s nightshirts and tweed caps, Dick Mack’s intimate wooden haberdashery and bar and An Droichead Beag where last night’s newbies Little Green Cars play a power out acoustic set to a full back bar.

Just up the road, St. James Church’s second night of hosting Other Voices broadcasts has a very fitting theme, deliberate or not. Night two is all about the voice and the myriad ways that singers can express themselves. The brisk-paced lineup begins with Blarney-born singer songwriter Mick Flannery who is introduced by series producer, host and fellow county man Philip King with simply “Some Cork people speak more than others”. To call Flannery laconic would be an understatement. His voice is a low rumble, a soft mumble that says what it needs to say and no more. There’s an expressive range in that limitation though. Five songs from a forthcoming new album are played. No song titles are given, no explanation or talk is provided. Flannery serves the song and nothing more. Occasionally joined by a backing singer, the stone mason by day recalls Leonard Cohen and Chris Rea with his lived-in singing voice and when he trades his guitar for a piano, his gruff style is a nice counterpoint to the colourful piano chords.

James Vincent McMorrow’s short four song set consists of cover songs that were performed on Other Voices over the last nine years. His solo performance includes a bare falsetto-led version of Amy Winehouse’s ‘Love Is A Losing Game’ which she performed on the same stage in 2006, a cover of Ryan Adam’s ‘Two’, his beautiful piano version of Steve Winwood’s ‘Higher Love’ which was recorded for the Headstrong charity and The National’s ‘Bloodbuzz Ohio’ which McMorrow manages to lay the emotion of the song bare and highlights just what a high calibre of lyricist The National’s Matt Berninger is.

It’s James’ explanations of his choices which contextualise the performances. He remarks that ‘Love Is A Losing Game’ felt like a song that was a thousand years old, he laughs at Ryan Adam’s pre-song ruminations on Cher from 2007 and recounts the crazy snow-filled week he had around Other Voices 9 which started with him seeing The National performing in an icy Dublin city before a weekend that saw him travel from Cork to Paris to Dingle and back, battling weather and almost missed flights.

Tonight’s newcomer voice is timid, shy and quiet in deameanor but transforms on a stage into something which touches on the old greats. Al Spx is a Canadian singer who goes under the name of Cold Specks and she’ll certainly be one to watch in 2012 as Anna Calvi was last year here. Taking her main inspiration from the field recordings of Alan Lomax, her voice has a deep blues and rich folk heritage to it. The accompaniment of a five-strong band featuring brass, guitar, percussion, piano and cello was at times a distraction to the real pull of the show – Spx’s smokey timbre that is filled with soulful texture. Look out for her forthcoming album. A truly unique other voice.

The definition of an Other Voices veteran closes proceedings. Lisa Hannigan has travelled to Dingle every December for “musical winter camp” in her roles as a solo singer and twice as a Damien Rice collaborator. This time around it’s full-band versions of songs from her latest and second album Passenger. Hannigan has transformed from a timid singer into a confident performer. Swinging and swaying in her green dress with a banjo, ukelele or guitar, she couldn’t have looked much happier. The band are all seasoned players from Gavin Glass on organ to Ross Turner on drums to the latest addition, and last year’s Other Voices performer John Smith who has found a perfect role for his considerable guitar and voice talent as was demonstrated by his more than capable duet with Lisa on ‘O Sleep’ (which is performed by Ray Lamontagne on the album). Other highlights include the interweaving fingerpicking of ‘Little Bird’, Lisa noticing her rock ‘n’ roll pit sweats and admonishing the cameraman light-heartedly for operating ‘pit cam’ and the aforementioned upbeat hoedown swaying of ‘Knots’.