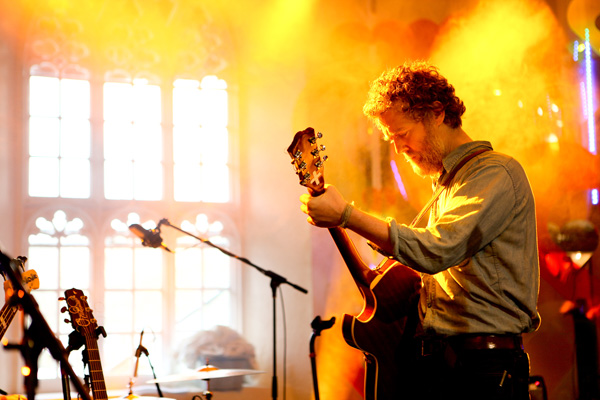 The opening night of Other Voices’ tenth year was marked by homecomings to the remote Atlantic peninsula town of Dingle. The place has become a haven for music fans over the last ten years every December. The musicians themselves are drawn to this place regardless of the now annual Other Voices gatherings finding refuge and a conductive atmosphere for creativity at other times of the year. Of the first night’s lineup, The Coronas call it their second home during their performance, Little Green Cars recently visited to try out the acoustics for a radio broadcast in the intimate setting of St. James’ church where the TV recordings take place (a capacity of 80), The Frames’ Glen Hansard recounts how the nearby town of Ventry has given the band space and time to record songs such as ‘Santa Maria’, which draws inspiration from the shipwreck of the Santa Maria de la Rosa of the Spanish Armada in 1588 at Dunmore Head.


The sense of history is obvious in the night’s first guests Triúr. Peadar Ó Riada, Caoimhín Ó Raghallaigh and Martin Hayes are versed in the traditional of Irish music. Yet their compositions speak a modern language through the virtuosity and delicate weave of their playing. I often think of trad as another language that you have to learn and grasp but there’s something very universal in what Ó Riada, Ó Raghallaigh and Hayes do with a concertina and two fiddles that’s easy to understand. It produces elemental outcomes: gentle foot taps and heartswelling melodies run their way through slides, jigs and reels as the three players (Triúr being Irish for three) lightly create substantial tunes. Iarla Ó Lionáird joins Ó Riada for a harmonium-accompanied emotive song to finish their set. That the inherently reverential music of trad works so well in a church is not that surprising but how well it fits in with the rest of tonight’s lineup is genuinely exciting. As Hayes remarks “well I guess we’re living in a post-genre world”.

As series producer Philip King refers to in his introduction, music is “the heart of the matter” and a stripped-down set from Annie Clark as St. Vincent gets right to it. Far removed from the impressive stage lights and intensity that burned at her recent Dublin gig, her Other Voices set is a stark exposition. Accompanied by Cate Le Bon on backing vocals, the striking Clark guitar with organ effects and reverb suit the setting and produce billowy versions of songs from recently released album Strange Mercy. Clark always manages to inject an extra note or beat between the verse and chorus of her songs which create a beautiful sort of tension and release and give her set a loose-limbed atmosphere.

Before the ultimate homecoming and headline set from The Frames, we were treated to Irish bands both new and established. Little Green Cars have impressed many with their ear to the ground in Irish music this year as a burgeoning talent. At an average age of 19, their easy ability to harmonise together is a skill that would normally be associated with those much more experienced. This band have been playing together for over four years though, so they come across as old souls in young and slightly nervous bodies. There’s an air of Win and Regine dynamics in the main singing duo of Faye O’ Regan and Stevie Appleby but make no mistake, Little Green Cars are a unit, a talented ensemble with a bright future and songs like ‘My Love Took Me Down to the River (To Silence Me)’ that reach for big folk-rooted band and make it there easily.

From the school of pop rock come The Coronas whose frontman Danny O’Reilly worried that they were “not a cool enough band to play here”. In their own sphere though, the Dublin band are dominant with six sold out nights in the Olympia Theatre coming up this week. While they readily admit that their fans are mostly in their late-teens, they showcase their pop persuasions with new songs from their just released third album Closer To You including a song written 10 miles from the church and an Irish version of their hit song ‘Heroes and Ghosts’ which demonstrates what would make those Olympia audience members go weak at the knees. Echoing Philip King’s introductory remarks once more, the band say the Irish version, entitled ‘Taibhsí nó Laoich’ also gets to the heart of the matter more directly as Gaeilge than it does in English.

Bringing it all back home to where it began nine years ago, Other Voices co-creator Glen Hansard and The Frames provide an intense end to proceedings with a set that includes some of the most-loved Irish songs of the last twenty years including ‘Fitzcarraldo’ , ‘Seven Day Mile’, ‘God Bless Mom’, ‘Stars Are Underground’ and a Blasketified version of ‘Lay Me Down’. The band’s gusto at performing ‘Revelate’ unravels as Hansard’s equipment fails prompting him to slam his pedalboard on the ground and a chain reaction means a mic stand physically collides with Colm Mac Con Iomaire’s 200 year-old fiddle (his playing tonight threads a line back to tonight’s opening act Triúr as well as keeping the Irish tradition alive and vital). All is recovered while they change pace into a twinkling wandering version of ‘The Aul Triangle’ with an audience singalong for good measure. They really pick up and deliver a rousing end dedicated to Mic Christopher and featuring members of his band The Mary Janes. Blaming the “wee people who unplug your shit” as the cause of the frustration Hansard hopes that the mistakes are left in so the end result is not so cosmetic but the truth is The Frames will endure even if the magic of television ultimately decides to erase the fairy-led detour.