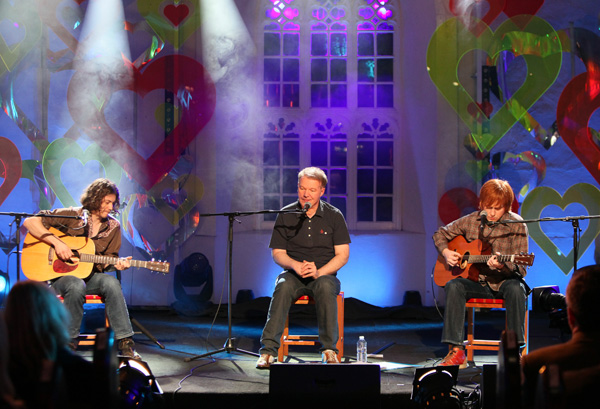 Saturday night and Dingle town is buzzing. It’s the third of the four nights of recordings in the church. Previous night’s guest Mick Flannery has Foxy John’s rammed with his music trail set and the impending live streams from St. James’ Church mean that the pub actually has queues outside.

No such problems for those who are lucky enough to have won one of the many competitions to be in the church. If they needed any cobwebs blown away, Band Of Skulls were the band to do it. The Southampton rockers took the stage on night three to deliver a five-song set of fiery rock ‘n’ roll. The devil’s music in a church with songs called ‘The Devil Takes Care Of His Own’?. Sounds just what’s needed. Low down, dirty bluesy guitar riffs, big drums and lots of dramatic stop / starts, Band Of Skulls’ set was steeped in the history of rock music in the same way that the second guest is steeping in the tradition of the British folk troubadour. Frank Turner sold all his possessions and went wandering with just a guitar in hand and seven years later, he’s racked up over a 1000 solo shows.

A smiley tall man with a commanding presence, Turner visited Dingle for approximately three hours after flying there from Berlin in the morning. While he was here, he found time to play a song about his grandmother, a song for a good friend (“Seeing as we’re in a church, I thought it ‘d be nice to do a song about drugs.”) and an ode to his hometown of Winchester, ‘Wessex Boy’ from his latest album England Keep My Bones. He finishes with a cover of Loudon Wainwright III’s cheeky ‘Motel Blues’, a tawdry tale of singer/groupie dynamics and with that he’s out he door and in a cab on his way back to mainland Europe for more nomadic guitar-laden travels and the spreading of the word of Frank Turner.

What happened next was rather special. Having suffered two brain hemorrhages in 2005, former Orange Juice frontman and solo artist in his own right Edwyn Collins was left with weakness in his right side and impairment of communication ability. His wife and manager Grace Maxwell helped him to read, write and speak again and for a while his only phrases were “yes”, “no”, “Grace Maxwell” and “the possibilities are endless”. He learned to sing once again but his physical impairment means he may never play guitar again. Not that it stopped him releasing two albums since his misfortune. In a magic and inspiring set in the church, Collins played songs from his two recent LPs Home Again and Losing Sleep backed by two acoustic guitarists. The set was emotional one. His wife Grace watched Edwyn perform beaming with pride and encouraging him throughout. He played Orange Juice’s 1982 breakthrough hit ‘Rip It Up’ as well as poignant numbers ‘Low Expectations, ‘Searching For The Truth’ and his most well-known hit ‘A Girl Like You’ – still an amazing pop song. Collins clearly enjoyed himself immensely: he played harmonica, rarely consulted his lyric book, laughed a lot and relished the guitar solos. A touching experience that was met with a standing ovation.

The night finishes with an ensemble cast. Cherry Ghost are a Bolton band of folk musicians who have been playing together since 2005. You may know their ‘People Help The People’ single which was most recently covered by up and coming singer Birdy. Tonight’s performance has a collective feel. They are joined by close friend and collaborator Jimi Goodwin of Doves. Both are good friends with Elbow who recommended that the band play here (even ringing our host Philip King on the night to see how things were going). The set was a pleasant one of gentle symphonic songs adorned with bluesy slide guitar, harp and synths including early hit ‘Mathematics’, the church-suitable ‘My God Betrays’ and songs from the band’s second LP Beneath This Burning Shoreline. Doves’ singer Goodwin joins the band for the remainder of the set and they play works in progress from his own solo forthcoming LP with ‘The Panic Tree’ and ‘Didsbury Girl’ being the standouts. There’s still time though for an edifying solo song from the harpist Esther Swift called ‘Stillness Of The Night Time’ and a cover of saxophonist Jim Pepper’s ‘Witchi-Tai-To’ to finish. With tomorrow promising sets from Wild Beasts, SBTRKT, Spiritualized and others, some rest is required but not received as the town pulls us back into its pubs and bars for some post-show chatter.