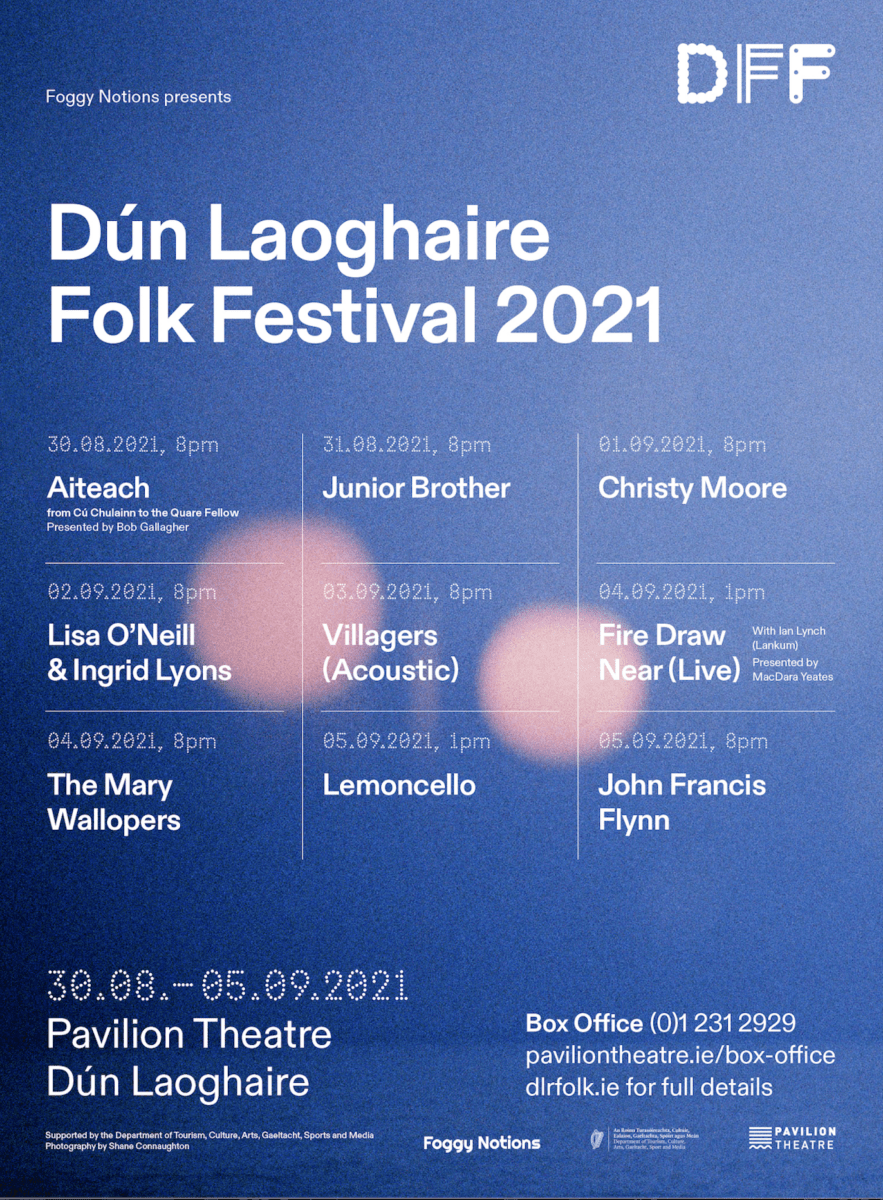 The promoter intends it to be the inaugural event of many to come, and of course, this year’s event will take place with the limited capacity, socially-distant guidelines in place.

All festival information from dunlaoghairefolkfestival.ie

All tickets will go on sale Monday August 16th @ 12 noon available through the Pavilion Theatre by Phone (01) 231 2929 & Online www.paviliontheatre.ie/events

Following on from its acclaimed premiere as a concert film at this year’s Musictown Festival filmmaker- turned- balladeer Gallagher brings his exploration of queer Irish identity and tradition to a live audience for the first time at the Dun Laoghaire Folk Festival. Weaving together traditional music, social history, poetry and the Irish language, this show will delve into Gallagher’s research, examining queer authorship and representation in Irish music and literary traditions. Gallagher will be joined on the night by musicians Claire Kinsella (Lemoncello), Gareth Quinn Redmond, Alannah Thornburgh, as well as poet and performer FeliSpeaks and special guests.

A big Foggy Notions favourite Ronan Kealy aka Junior Brother from County Kerry possesses one of the most unique voices and songwriting styles in Irish music. After a over a year of livestreams and pre-recorded performances Junior Brother is raring to play to live audience once again, accompanied by a full band. JB’s music is forebodingly humorous, absurd, moving and startlingly idiosyncratic. He is currently working towards the follow-up to his acclaimed 2019 debut album Pull the Right Rope.

What can you say about this man other than he is a perennially relevant voice in Irish music, a brilliant interpreter of both ancient and contemporary songs, a constant source of comfort, a voice for the marginalised, and a truly gifted communicator as he enters his seventh decade of singing. This will be a special and a very intimate night for the lucky audience in attendance.

An exclusive event for the DLR FOLK FEST following a recent Foggy Notions Artist Residency at the Pavilion Theatre. Acclaimed songwriter Lisa O’Neill and brilliant emerging writer Ingrid Lyons, will bring the worlds of music and literature together through a wildly imaginative and exploratory storyboard. Lisa is currently working on her fifth album due for release on the Rough Trade label. Ingrid Lyons is a fiction and arts writer who has contributed to some of Ireland’s leading art publications and written contextual essays for numerous art galleries and institutions. Ingrid is currently working on a collection of short stories.

Another huge coup for DLR FOLK, as local boy and internationally acclaimed songwriter Conor O’Brien will perform acoustically for an intimate audience. Villagers fifth studio album Fever Dreams is released this month preceded by brilliant singles The First Day and So Simpatico. This will be one to remember!

Ian Lynch is a singer, songwriter and multi-instrumentalist best known for his work with the band Lankum. Since 2019 he has been producing and presenting the podcast Fire Draw Near which investigates all aspects of Irish traditional music and song. A folklorist by profession, for this special live event Ian will be exploring the evolution of the song Johnny I Hardly Knew Ye.

They have taken Irish folk music by storm, hell they’ve taken Ireland by storm. The Mary Wallopers are a folk group from Dundalk, Ireland, breathing new life into both well known & rare ballads. Travelling the length & breadth of the country singing & collecting songs, they exude a raw energy that could be described as the Clancy Brothers meet John Lydon.

Lemoncello are like two halves of a whole. Laura Quirke and Claire Kinsella met in university, and bonded over their mutual love of close harmony and vulnerability in songwriting. Kinsella is an intensely proficient cello player, while Quirke’s voice has grown into its own character over time. Their latest EP, 2020’s Oil and Water and the stunning accompanying video House of Cards earned the group many new fans.

You’ll be hard pushed to hear a more original and utterly brilliant album in 2021 than John Francis Flynn’s debut, I Would Not Live Always, taking traditional music more to interstellar new realms whilst remaining beautifully respectful at the same time. A landmark album for Irish music. Come and see him perform it to an entranced live audience.