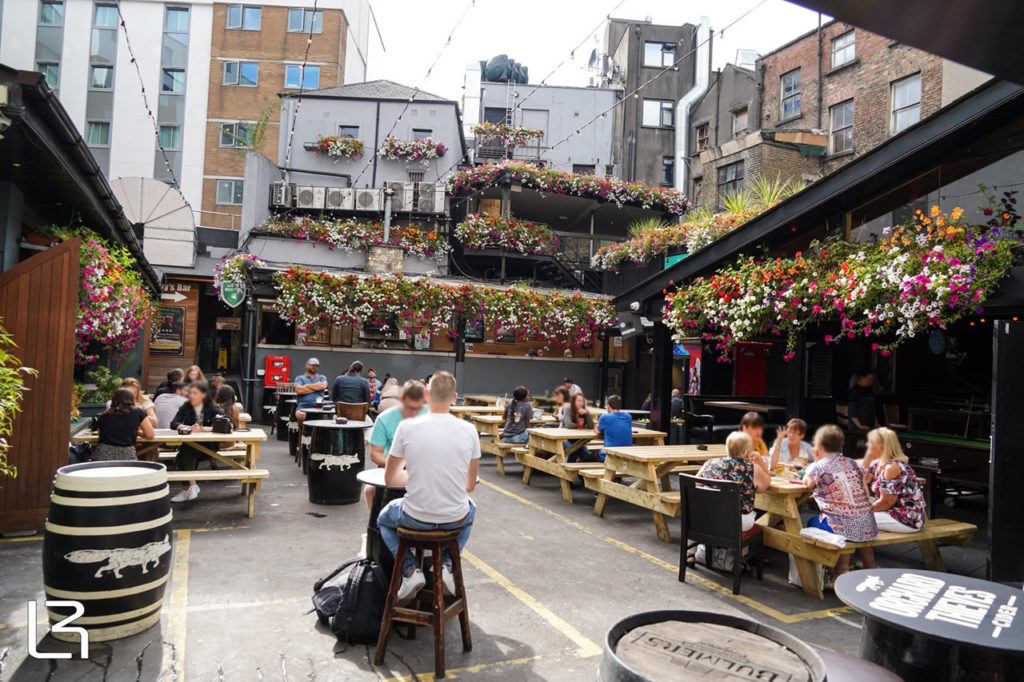 It has been on the cards for a while, but planning permission has been granted to turn turn the large outdoor beer garden used by three pubs in the North city centre, shared by Fibber Magee’s, The Living Room and Murray’s, into more hotel rooms.

Planning permission has been approved by Dublin City Council for a large extension to the Holiday Inn Express on O’Connell Street which will take back the large outdoor courtyard and turn it into a six-storey extension to the hotel which is designed to provide 89 additional hotel rooms.

It’s yet another example of short-sighted planning in Dublin with no regard for the cultural social space that the beer garden, one of the largest of its kind in the city, provides. We can’t just keep replacing every cultural space with hotels, there has to be a balance or what are we offering ourselves and our tourists?

The news arrives just as artists in Richmond Road Studios in Fairview has been given six days to evict the building they’ve been in since 2002 by the developer Kroll.

Give Us The Night

Give Us The Night posted about the news both Richmond and outdoor beer garden on Insta citing the lack of city planning:

“How did it come to this? First of all, there is not a robust policy in the city development plan (2016-22) to prevent planners from making a decision like this. Given that the owners of The Holiday Inn also own the beer garden space, it makes the decision a fairly straightforward one for the council it would seem. However, in the new development plan (to be introduced later in the year for the 2022-28 period) the council would not find it so easy to permit the building of extra hotel space in Dublin’s over concentrated city centre, and in fact if they *really* wanted to, DCC could use policy from the forthcoming plan now but chooses not to.

We also wonder, given how The Holiday Inn recently referred to noise coming from the beer garden which apparently disturbed their guests and prompted them to want to shut it down, why the correct standard of glazing/soundproofing wasn’t installed? This seems to be another flaw in the planning process and oversight of the council, which we’ve seen in many other similar disputes involving new developments in recent years.

Only days after @richmondroadstudios were served with an eviction notice by American corporate management agency (and leading NAMA consultant) Kroll, we have now learned that the building of this Holiday Inn was financed through a sweetheart deal between hotelier Jalaluddin Kajani (of JMK Group), Anglo Irish Bank and NAMA, which puts The Holiday Inn in a position to now evict each tenant from the beer garden.

“We do the pub really well, we do a night out very well.

“I think what we are arguing is that Dublin City Council need to have a joined up idea about what is it, in terms of tourism, that Dublin offers.

“People come here not just for a museum and not just to go to the zoo – they come here for the night-time economy, and slowly we are losing those spaces because they’re getting eaten up by hotels, by developments.

“And if we continue to do that, we just won’t be that cosmopolitan city that’s good for a night out because those spaces won’t be there”.

Labour councillors Darragh Moriarty and Declan Meenagh,talking to The Journal, it was a fact that the balance towards Dublin catering for tourists “has swung too far.”

“Numerous music venues, late bars, night clubs and dance venues have all been forced to shut their doors in recent years making way for either the new hotel developments or the further expansion of existing hotels.

FIbber Magee’s is an iconic rock bar that has been a meeting place and social point for rock music since its inception in 1979 regularly hosting bands and a community since. U2, Thin Lizzy, Machine Head, Biohazard and more are among the bands who have played the venue.