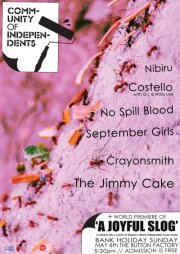 A Joyful Slog is a documentary that takes a look at the independent music scene in Ireland over the last 20 years.

Featuring interviews with the likes of And So I Watch You From Afar, Jape, Adebisi Shank, The Jimmy Cake, labels, journalists and bloggers, the film examines “how a DIY music ethic has developed in the capital city and country as the music industry has been changing.”

On Sunday May 6th, the documentary will gets its first airing along with six free live sets from  The Jimmy Cake, No Spill Blood, September Girls, Crayonsmith, Costello with GI and William Lee and Nibiru. Admission is free and it starts at 5.30pm. Facebook event.

The gig will be filmed for A Joyful Slog’slarger project Community Of Independents which incorporates video profiles and studio-based magazine programmes presented by Aoife Barry and Danny Carroll on DCTV and online. If you can’t make the gig, you can catch it from home on Aertv.ie.

The Joyful Slog of Independent Music was produced by Barry Lennon, Dublin Community Television with the help of First Music Contact  and funding from the Broadcasting Authority of Ireland.