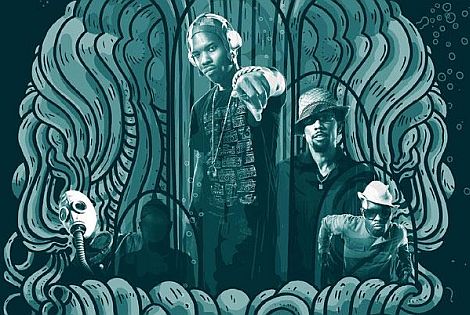 Voodoo and the Observer Music Magazine

All the good hip hop these days is in the control of the producers, hence the abundance of instrumental records coming out. There are still some quality emcees coming out who are guaranteed to blow your mind. Let’s take a look…

The latest in a string of super releases from Lex Records (Neon Neon, Subtle, Boom Bip, Kid Acne) Shape of Broad Minds are a hip-hop supergroup (read: quality emcees) with producer Jneiro Jnel at the helm. Jnel produced the Dr. Who Dat album Beat Journey last year, one I don’t think I ever featured here but one which matched my summer headphone mood. Along with JAWWAAD, Rocque Wun, Panama Black, they have made a promising release full of hip hop artistry, in the form of the Blue Experience EP .

Like much of Madlib (and his brother more on that later…) and J Dilla’s work, the craft of the hip hop producer shines throughout the EP with remixes, instrumentals and alternative remix instrumentals of the lead off track “Let’s Go” featuring the appearance of my favourite emcee, MF Doom (aka Viktor Vaughn aka King Geedorah aka Dangerdoom aka Metal Fingers aka Daniel Dumile…phew..). “Let’s Go” is a flawless, dizzying, spinning “beat journey” with purpose, a pointer to where hip hop really should be in 2007. On track two, “Electric Blue”, the production is incredible an ethereal bass-driven instrumental with some intricate secondary beats that feature on the periphery of the track. Looking forward to the album – Craft of the Lost Art.

Next up, is Madlib’s little brother Oh No who has delivered the Donuts of 2007 with Dr. No’s Oxperiment – a 28 track instrumental album, no song over 2 minutes long which takes takes in a lot of influences. Featuring samples from all over the world, loads of funky rock ‘n’ roll guitar riffs, heavy beats, flutes, and soul. It’s an eclectic mix and some of those jams are just waiting for an emcee to rhyme over them. Oh No himself has first call on that one.

Keeping it in the family, the man who doesn’t know how to stop making records, Madlib is releasing the 3rd and 4th parts of his Beat Konducta instrumental series together this month. All based on samples of Bollywood, it matches the brilliance of Vol 1 & 2: Movie Scenes. Much like the edited soundtrack Bombay The Hard Way – Guns, Cars & Sitars by Dan the Automator and DJ Shadow, this holds Indian music in reverence and creates a fresh palette of hip hop sounds for the listener to play with.

Madlib the Beat Konducta – The Rumble

I’m really liking what I’ve heard from this guy so far. From Walthamstow, East London, Lethal Bizzle’s new album Back to Bizznizz is out now and the single “Babylon’s burning in the Ghetto” is a standout, although there’s a heavy version on his myspace worth a listen. It’s grimey, it’s London innit.. but better than the new Wiley album (I just don’t rate his flow).

Thanks to a Pitchfork compilation and Jim’s radio show, I got a copy of Breaking Kayfabe, Cadence Weapon’s frankly fantastic album that fuses hip hop with electro squelches a la Spank Rock without the booty obsession. A self-confessed writer, rapper, producer, remixer, and media darling, this 21 year old Canadian emcee is going be massive. Check his site for his remixes of Lady Sovereign, Ciara and Ghostface.

Junk Science are Brooklyn duo, Baje One (mic) and DJ Snafu (beats) and have an album coming out in October on Embedded Music / Definitive Jux. called Gran’Dad’s Nerve Tonic. This is the lead off single “Hey!” an upbeat joint with Baje One sounding like Aesop Rock if he chilled a little bit.

10 reasons why this is the best video ever (this week)