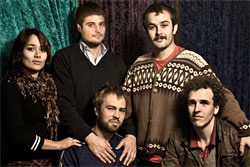 On my last night in Perth a few weeks back, I neglected to mention that the last band I caught on the whole blog Oz trip was Apricot Rail. Coming on like the child of Halves and The Jimmy Cake at the gig we caught in The Velvet Lounge @ The Flying Scotsman, a beautifully nuanced and subtle instrumental band who have just released their self-titled and excellent debut album on Hidden Shoal (someone recently called the label – “This generation’s 4AD”, tall order).

The album is full of gentle sunshine largely-instrumental tunes which are working really well right now as the sun is indeed shining (apart from ‘Car Crash’ which has lyrics wishing someone would die in a.. you get the picture) . At the gig, we met Hidden Shoal’s Cam Merton who we chatted to briefly. As it turns out Hidden Shoal have a roster from all over the world which includes the ambient wing of Belfast’s Space Dimension Controller – RL/VL. Check out the full roster and there are sampler albums too.

Here’s a dark video of the band playing ‘If You Can’t Join Them, Beat Them’ live at the gig and their free single ‘Pouring Milk Out The Window’:

If you like it, buy the album: Hidden Shoal / eMusic / iTunes.