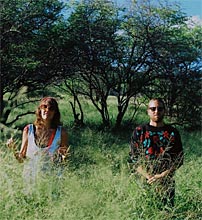 Stockholm, Sweden is home for North American dreamy guitar siblings Sarah Parthemore and Jacob Donald Snavely aka Dag för Dag who will release their debut album Boo next month. They have already released a 6-track EP entitled Shooting from the Shadows on Saddle Creek last year.

Half the album was produced by Richard Swift with the other half by Johannes Berglund.

Check out two tracks from Boo and a couple of videos below.