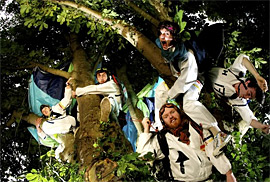 Ken McGuire runs Kilkenny Music and you can find him on Twitter.

I caught Mugger Dave live back in March just ahead of the release of What’s She Doing Here?. High charged rock with some great ska and punk undertones (and harmonies to match) that will make for a fantastic summer sound. Nice bunch of lads too, has to be said.

Kilkenny indie four-piece that are knuckling down and getting out on the road. Two great singles and videos in the form of ‘London’ and ‘Address The Silence’ in the last 9 months, the most recent just last week. Invite these guys to your town as they do not disappoint in the live setting.

They’re full of beans, two solid EPs last year in the form of The City, The Tree & The Fox and Sidney Maxwell Williamson, the former racking up some serious iPod play in the last 12 months. Looking for big things from them this year (and another show in Kilkenny) with the new album on the way.

Keeping a few euro aside for the Light Shape Sound album release in May. The IMRO tour and album launch keeping them busy into the summer and the festival season where they’re bound to make an electro impact.

Came across the band first through Playlist Mix months ago and loving the sound since. New CD on the way at the end of the month and bound to be a highlight at the indie festivals across the summer.