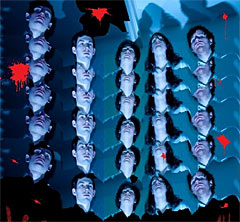 Gugai is the promoter responsible for bringing great bands to the west, or more specifically to the Roisin Dubh – the best venue in Galway. He’s giving away tickets to Villagers and Dinosaur Jr/ Built to Spill- check the post.

The only thing that really takes the pain of Givemanakick’s break up away is how amazing Steveamanakick’s Windings are sounding. Expecting great things from the new album, and I doubt I’ll be disappointed. Windings are at Strange Brew on May April 29th – Free admission.

They have just released their debut EP There Is No Lost Chord and which has more than lived up to the promise of their incendiary live shows. Animally Collectively indie space pop from the West. What’s not to like?
Lost Chord – ‘Cheats’

I don’t think you could write anything about Irish music at the moment without devoting a large section of it to the astonishly excellent Villagers. I’ve been a huge fan since he played the first show as Villagers in Galway in February 09, and if recent performances, SXSW, supporting Wild Beasts, Jools, are anything to go by, the upcoming May tour for the album should be considered unmissable. [Win tickets to Villagers in the Roisin on May 21st – email [email protected] with “Villagers” as the subject to enter.]
The Meaning Of The Ritual – Villagers

4. And So I Watch You From Afar

I think it’s a great testament to Irish music at the moment that two of my favourite acts at SXSW were Irish. Villagers were one, but the afternoon show at the Full Irish Breakfast by ASIWYFA was as captivating and invigorating a performance as I saw that week, mind blowing energy and sheer balls out rock. Stripped paint off the walls. An amazing band.

02. A Little Bit of Solidarity Goes a Long Way

One of the hardest working acts I know, So Cow continue to impress with his noisy guitar based , genuinely clever and heartfelt indie pop, and the best strumming in the business. I think it would be really hard not to love So Cow.

Gugai has also offered us three pairs of tickets to Dinosaur Jr & Built To Spill on Monday 10th May in the Roisin. Email [email protected] with “Dinosaur” as the subject to enter.

Listen to the new And So I Watch You From Afar single – ‘Search:Party:Animal’