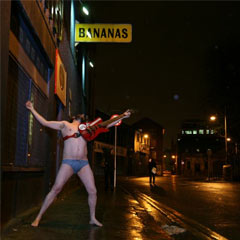 Pete Brady runs the popular Irish message board and resource Thumped. He’s proof that Thumped is not just for pricks.

Legion of Two’s Riffs was probably the best Irish album of 2009 – an hour of unrelenting, pounding bleakness that would have made the perfect soundtrack to The Road but works just as well for shitty Monday mornings. A follow up EP (or maybe LP) is due out before the end of the year.

Here, Not There was just so fucking good, but after their Comets collaboration with SEBP on Night Horses what are the chances they’ll maybe go electric for even part of the follow up? Ah go on.

The housewives favourite. Probably the finest straight up punk rock band in the country and the creators of the greatest one-take video of a man in his jocks dancing on top of a mountain while playing guitar on a broom handle you’re ever likely to see. Any band whose tour diary includes the line “Things took a turn for the worse when he grabbed the hatchet.” deserve a place on this list.

Chariot provided my first “Where the hell did this come from?” music moment of 2010, and has gotten a listen almost every day since. Awesome stuff. I won’t bother describing them since they’ve released their album for free, which means you can go check out ‘I Am Lion’ for yourself then come back and tell me just how right I am. And there’s a second album coming out over the summer? Already? Deadly.

Now that is some fucking voice. The end.