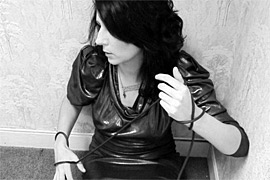 Straight from her Twitter, Sinead Gleeson is a Dublin-based journalist and broadcaster who writes/natters about music, books and the Arts. She also runs Musical Rooms.

Babybeef is one Sarah Carroll Kelly, a multi-instrumentalist who happens to love synth pop. Possessed of a wonderfully husky voice and a penchant for AC/DC covers, she’s already been talked about in the same breath as Peaches. The Dublin-based performance artist manages to infuse all this super-catchyness with dark pulsing rhythms. And if that’s not enough, she counts Sparks, Kate Bush and Daft Punk as influences. Watch out for her self-titled album, due for release on After the Quake Records later this year. She plays her first live show of 2010 on May 2nd with Hundred in the Hands at Crawdaddy.

Comprised of some of the best and most experienced musicians in Dublin (Dylan Phillips formerly of Pet Lamb), David Lacey (who plays with Legion of Two) , Stephen Ryan (ex-Stars of Heaven) and Gavin Ward, it’s not hard to see why The Dinah Brand are such a solid, interesting outfit. Apart from a song on Road Records’ Record Store Day compilation in 2009, they haven’t released anything for half a decade. Their new album, I Can Walk Through, is one of the best Irish albums I’ve heard in a long time; filled with Americana-influenced rock and lyrics that actually have something to say. It’s set for release on Transduction Records (also home to Spook of the Thirteenth Lock) this summer.

Steve Fanagan, who is an ash volcano-sized talent in his own right, has given a home to several excellent Irish acts in recent months. One such is At Last An Atlas, the solo project of Hollows member Greg O’Brien. Splicing samples, organs, nylon strings and chimes over his Lou Barlow-esque voice makes for a captivating listen. His debut album, From Which We Were Raised on his Slow Loris label, was released earlier this year.

So great is the output of Irish label Slow Loris that I’ve gone for another of their acts. SCHFLI is another one-man-labouring-under-a-lengthy-moniker, with the project helmed by Alex Synge of Toothsticks and The Dewoh. Old Ghosts, was released in 2009, and was a perfect showcase for his electronic-tinged scores. Think Johan Johansson with more guitars. Atmospheric, but never overly-obscure, Synge has huge potential as a composer.
Follow @LazyInfants on Twitter.

Electronic music in Ireland has had its ups and downs, but it’s in the middle of a fairly fluid crest at the moment. When I first heard Angkorwat (aka Niamh Corcorcan), it reminded me of lots of the things I first liked about Plaid. Like Babybeef – and oh, Laura Sheeran, Carol Keogh, ilex, Valerie Francis, Heathers – there are lots of Irish women making brilliant music right now. Check out her fantastic ‘Ciccone Snap’.
Follow @angkortwat on Twitter.