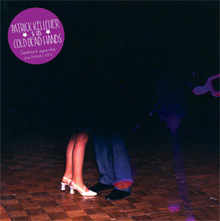 Skinny Wolves are a Dublin-based record label who you should know about. They’ve released records from Telepathe, Effie Brest, Cap Pas Cap, Indian Jewelry and have been ahead of the curve with their selection of touring bands from Xiu Xiu to Gang Gang Dance to Ariel Pink to Grouper.

The label have just released Patrick Kelleher’s Contact Sports 7″ and they have gigs upcoming from Former Ghosts, Parenthetical Girls, Lucky Dragons, Blessure Grave, These Are Powers and more.

They’ve been very quiet since the release of their much acclaimed debut LP, Spektrumtheatresnakes, but now thanks to a line up change, they are back in the saddle with some new recordings and live shows being planned. With the songs on Spektrumtheatresnakes being kind of old by the time of its delayed release, the Kranes are bursting at the seams to get their new Psychik Pop Adventures out in the open.

If these were around in New York City in the early 1980’s I wonder would Brian Eno have chosen them for his NO NEW YORK no wave comp? They could easily hold their ground between the sounds of Lydia Lunch’s Teenage Jesus & The Jerks and Georgia’s best kept secret Pylon. Having recorded their 1st 7″ before they even played a show, its going to be very interesting to see where their sound goes from here, once they get stuck into playing live….

Everyone must know about Patrick’s You Look Cold album and how great that was by now, but its his new songs and direction that is exciting us most at the moment. First evidence of that is on the new Contact Sports 7″ on Skinny Wolves records, with its nods to the early sounds coming Mute, Factory and 4AD Records, almost like John Foxx covering a slow burning Italo classic. Even newer than that sees a more gothic electronic sound. Rumour is, he is listening to too much Eurythmics at the moment!

Hear ‘Contact Sports’ on this podcast – 11mins 30 seconds in.

Having quickly gone from having a gig booked with no songs written to having a release out, on one of the coolest labels releasing music at the moment, CAPTURED TRACKS, within a year, we can’t wait to see whats going to happen within the next few months. They have now broadened their lineup with a new bass player, giving their live sound a more rounded edge. Dark reverb drenched guitars chime along with romanticising crooning vocal melodies to create the perfect disposable noise pop, this side of C86.