Daedelus – Love to Make Music To 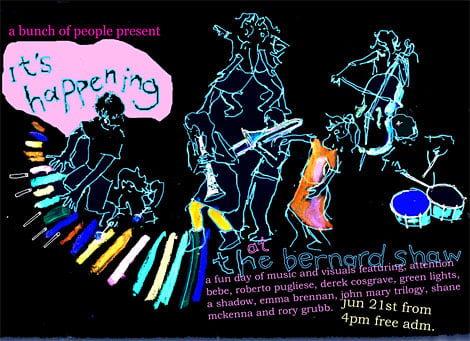 My favourite pub at the moment is The Bernard Shaw in Portobello. It’s been run by Bodytonic since October 2006. Despite hearing it was due to close in early 2008, it has stayed open and doesn’t seem to be closing anytime soon. The pub has an emphasis on art, music and multimedia with art exhibitions, movie screenings, regular DJ sets, carboot sales and live bands.

Saturday saw one of those events entitled “It’s Happening” take place. It ran from 4pm til about 10pm firstly taking in some electronic performances inside the bar which I missed. I did however manage to catch the closing band who played outside in the smoking area. The plan was for the band which included clarinet, bass, trumpet, keyboard, glockenspiel to play covers of cheesy ’90s songs. So think ‘Rhythm of the Night’ , ‘Groove is in the Heart’, ‘Cotton Eye Joe’ and loads of others. It was mental. The smoking area turned into a house party for two hours with people dancing on the pool table, up on table and chairs, sitting on people’s shoulders, lollipops, pass the parcel and a singalong led by the band’s singer and cheerleader, Jane. It was great, so much fun. The reason I bring it up is because it’s happening THIS THURSDAY again in the venue so pop down. Here’s a taste of what to expect – ‘Mr. Vain’:

Eh Sweden, did you forget something?