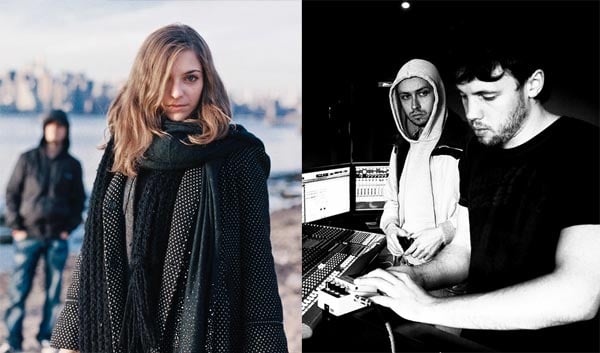 Tonight, Greek electronic pop duo Keep Shelly In Athens play Whelan’s in Dublin with Ginnels and White Collar Boy while tomorrow night, they hit Cork for a show in The Pavilion with Young Wonder and previous remixee Sacred Animals before a slew of gigs around Europe.

The Athens duo have collaborated and remixed another duo, Dublin’s cinematic Solar Bears. The two came together for a track off Solar Bears’ new album SuperMigration called ‘Alpha People’. We thought it’d be a bit of fun to get the two talking about their music, influences, playing live and much more. Here’s what came out of the joint conversation. Kicking it off with John Solar asking the questions to Keep Shelly’s Sarah…

What did you listen to as a teen? Were there any defining records that got to you?

We have been listening to much British music, Brit pop, dark wave…

Are you gearing towards an album?

Hopefully, early next year we will be able to release a full length. When we will get back home we will start up working on new material!!!

Do you feel any pressure after the response to your past releases?

Not pressure but it is going to be a new experience to us to record a full length, because until now we have been in studio to record one or two tracks each time, so the whole idea of the album is something interesting to deal with. It is part of the adventure. But no pressure, pressure never helps!

Where do you record and what is your approach to writing as a band?

We make music in our bedrooms then go to the studio lay the vocals over the tracks. In studio versions we only have electronics and vocals. When we start writing our music we never follow a specific way to do that, each time is different. It comes out with a natural flow.

That happens because until now, as I said, we only had independent EP releases so it was more like a matter of the inspiration of the moment. The only thing that matters to us and it is sort of like the Keep Shelly in Athens recipe is to make songs we like to listen to.

Do you concentrate on themes or write individual pieces of music?

Individual pieces of music, that is why some of our songs have two parts.

Has it crossed your mind to move to America given the demand over there for KSIA and the fact your label is situated in the States?

Nah not really. It feels like it is working out the way it is. We can still make music while based in Athens. To tell the truth all the inspiration comes from our hometown and country. Backgrounds, family, friends…

Is there anyone influencing you at the moment or any artist that has changed how you feel about creativity?

At Coachella, we had the chance to catch Radiohead twice. It is probably a cliche, as most people respect Radiohead, but what I have seen in their shows was amazing. Real artists playing their music with their souls while being perfect professionals at the same time. Nothing is random about success, I mean people who are working are always paid off for their dedication to what their doing. But this is always a thing to admire and to inspire.

Do you have any specific hopes for this year or are you just going with things as they happen?

We want to make more music and play more shows.. What else?

How much attention do you pay to reviews?

To be honest, especially while touring I don’t really read the reviews. When I get back I see videos, I read some of those and we all sit down say-after the whole experience is over – we will change this or we will keep this trait.

Where do you feel more comfortable? In the studio or onstage?

It is quite the same thing. Studio it is from where it starts and stage it is where it ends. I mean, in studio you write your music to communicate it at some point from the stage. So it is something like a chain and yes, it leads to the same thing which is playing music for the people. So there is always somehow that interaction between band and audience.

How do you guys got together as a band? What was the thing that made you start working together on making music?

We met at college and met up years later to try out a track idea I had. It was very casual but it became more concrete after the reception our early efforts got online.

What is the part in the songwriting process you enjoy most?

That’s a good question. Often cases it is the melody surfacing and sometimes it can be an effect like distortion or saturation that has us smiling.

Is it something specific you draw inspiration from any time you sit down to make more tracks?

Films would be a main factor but relationships and recollection would be a strong second. It is hard to pinpoint inspiration or where to give credit to. I am not convinced we are actually creators in that ideas are given to us if we are open to them. I have an abstract image or a large creative cube that everyone chips away from. Maybe these things are pre-determined. That’s the beauty of the artform.

How important are the live shows for you? Do you long for that moment that you will be on stage and you will have the chance to be so close to your listeners? It is always a thing that fascinates me!


They are really important to us as a band. The rapport you have each time is adrenalizing. We like to
experiment with new tracks and new versions of older songs.

Have the local media and press have been supportive to you guys?
The local media have been very kind to us in particular Harmless Noise, AU Mag and Nialler9. It’s not something we take lightly and it definitely keeps us going.

How do you deal with that whole press thing?

Being as humble as possible. Whatever accolades you achieve can be stripped away at any time. The music
business follows trends more than talent unfortunately.

What have you listened lately that you found interesting? Are there any new bands you have discovered just now?

Lately we have been listening to a lot of Brian Eno. His work with Harold Budd and Cluster is truly momentous. He uses suggestion and emptiness to great effect. Todd Terje is someone I have been turned onto very recently.

Is there any time that you doubt about the life of the musician that we have chosen to live? Sometimes it is hard, right? living on the edge!

It’s hard financially but rewarding in every other way. Travelling is vital for perspective in my opinion. I
doubt I could visit all these places if I was working in some dead end office.

But, then music seems like a cure for our souls. Do you feel like what you are doing is helping you out sometimes to express your feelings in a so real way, through your music? What do you think of the greatest benefit you get from making music?

Music is very therapeutic and protective. I don’t know what it is and how it comes about but there is a healing
process involved. There is nothing I place higher.

I loved our collaboration! If we had the chance to do a cover together, which song would that be?

‘Aladdin’s Story’ by Death in Vegas.

The Americas and Japan.