Twelve months removed from a hugely successful first installment that saw Limerick’s small venues play host to a trail of gigs from DIY artists across the genre spectrum, the city’s music community is coming together again this weekend to present the second edition of Féile na Gréine (‘festival of the sun’).

Féile Na Gréine – A music trail through the heart of Limerick City.
Aug 16, 17 & 18
Search us on fb or [at]feilenagreine on Instagram
(A collaborative affair between Lower Your Expectations & @DIYLKMUSIC) pic.twitter.com/Veoe92QlB9

A collaborative affair, the trail is curated and produced by local promoters and individual raconteurs, namely members of the DIY LK collective, and Lower Your Expectations man Jack Brolly. Taking in Pharmacia, The Commercial, Lucky Lane, Mother Mac’s, the Milk Market, and a special edition of agitpop raver Post Punk Podge’s ‘guerilla’ street gigs, the trail is set to provide a look at why Limerick is so vibrant and vital to independent music in Ireland.

If that isn’t a feat in and of itself, get a look at that lineup, completed following the release last week via social media of the trail’s timetable: 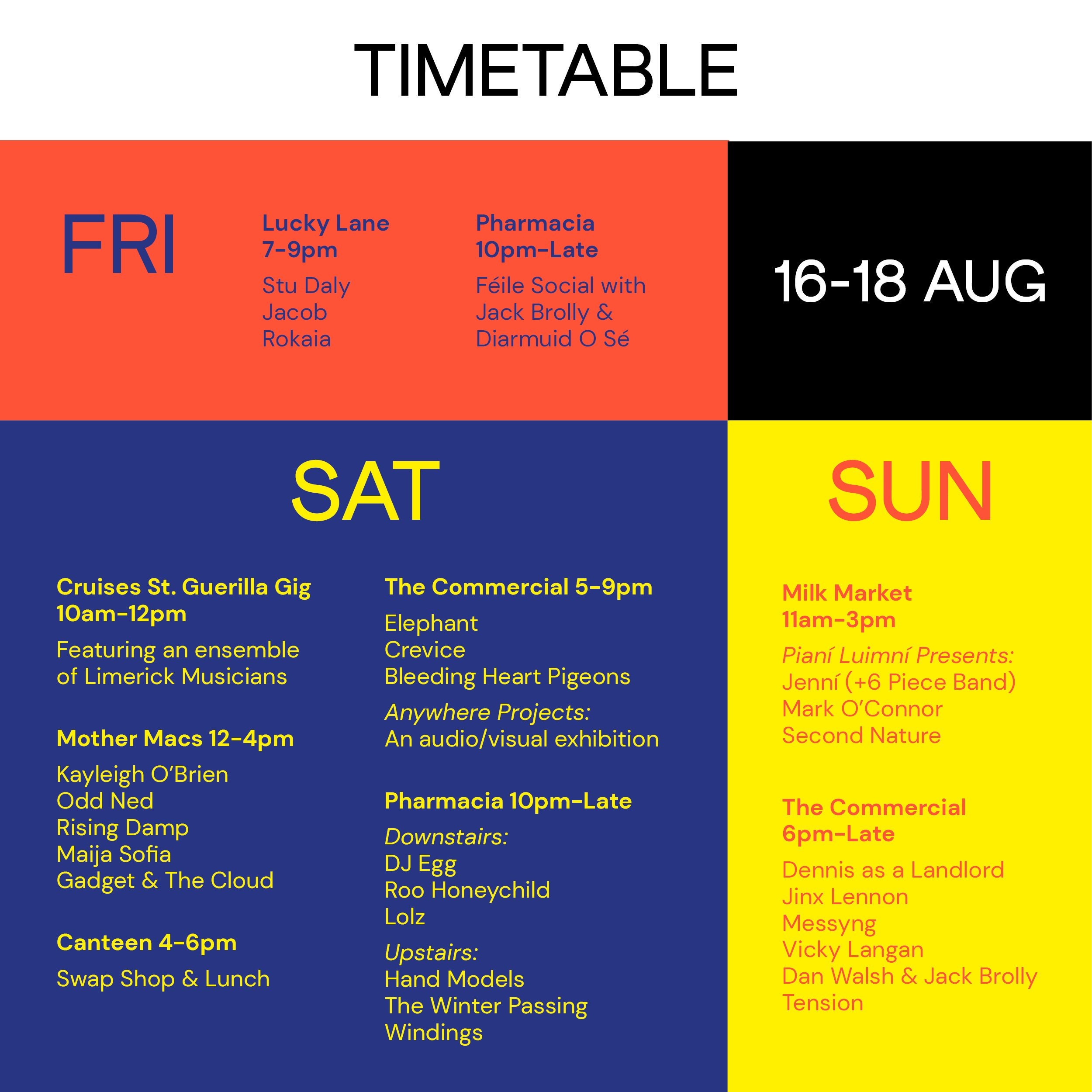 Some hefty business to say the least. Friday eases weekend visitors into proceedings with live proceedings at Lucky Lane, including Teletext-affliated sound-artist Rokaia, before heading over to Pharmacia for tunes courtesy of some of the festival’s brain trust.

Saturday sees the trail in earnest happen from early on, with some very strong genre-themed lineups throughout the course of the day: Mother Mac’s hosts an afternoon of experimental electronics, The Commercial’s billing includes a rare live outing for Cork supergroup Crevice, and Pharmacia’s double-billing of Limerick veterans Windings, upstairs from DJ sets from GASH Collective and Club Comfort members, speaks to the strength and diversity of the trail’s lineup, as alluded to in a recent video leak from Post-Punk Podge on social media.

It’s Sunday’s show-closing lineup that has much to reveal, with a mixed-media lineup that includes spoken-word hero Jinx Lennon, Arthur Pawsey’s Dennis as a Landlord solo project, the reigning ‘queen bee of Irish noise’, Vicky Langan, a collab between jazzman Dan Walsh and Jack Brolly, as well as live doings from Cork/Kerry scuts Messyng and hard-drum exponent Tension.

Féile na Gréine happens throughout the weekend in venues across Limerick city. All events are free, and crucially, all daytime venues are both all-ages and (emphasis) DOG-FRIENDLY. For more info, peep the Facebook event.