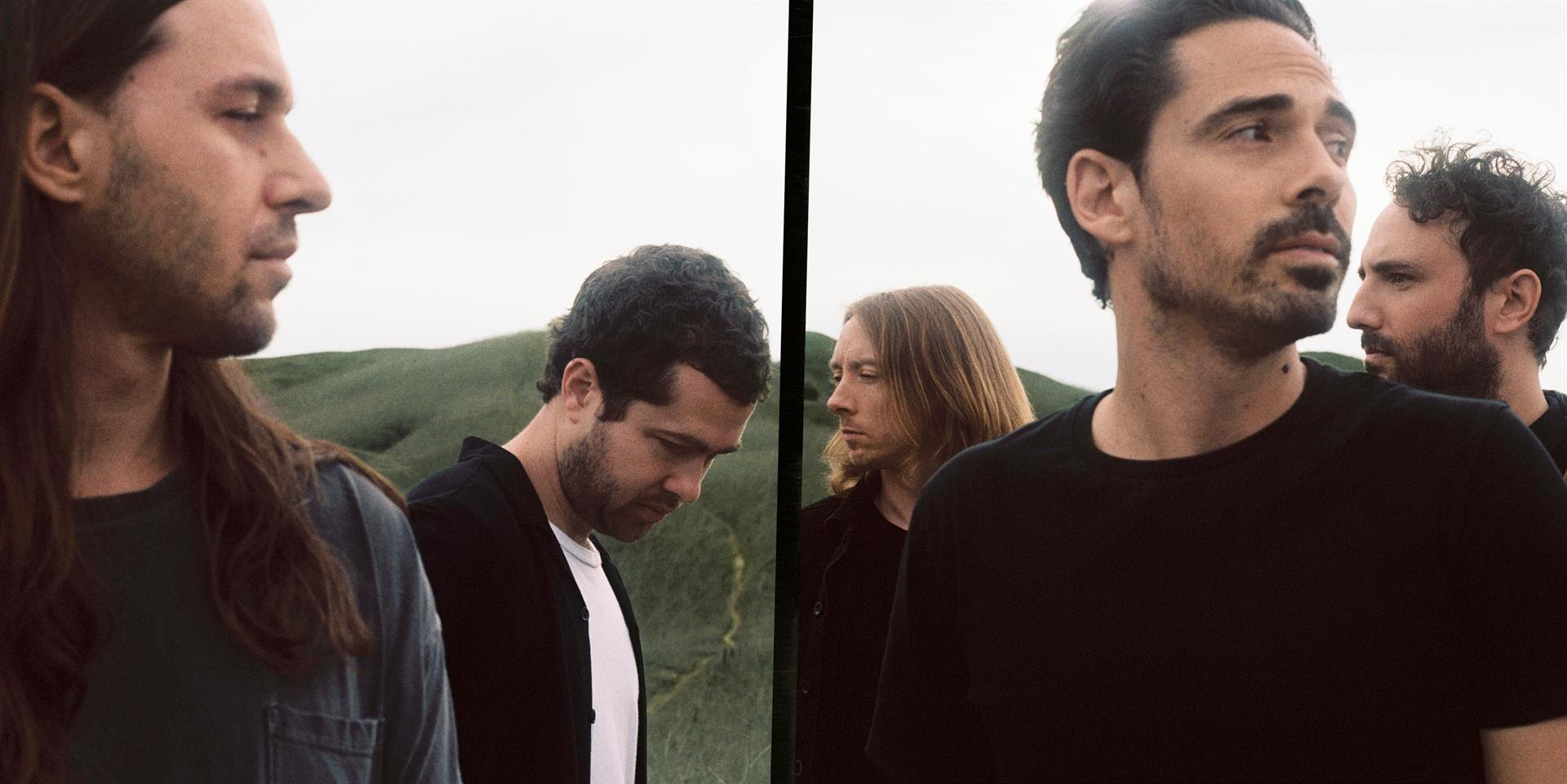 With the LA band Local Natives gearing up for the release of their forth album Violet Street out April 26th, the harmonic indie-rock band have announced a gig at the Academy in Dublin as part of their European dates.

The date is Saturday October 12th and tickets are €27.50 plus fees on sale this Thursday at 10am from Ticketmaster.

Face-to-face songwriting and musical interplay put to tape: the classic studio setting is juxtaposed on Local Natives’ fourth full-length, VIOLET STREET [Loma Vista Recordings] with modern production and visuals to form a timeless album. The band’s signature soaring 3-part harmonies are augmented by loops of tape, physically spliced and transformed by hand, the result of experimenting in the studio with producer Shawn Everett [Alabama Shakes, Kacey Musgraves, The War On Drugs] is a band renewed.

In essence, Local Natives [Taylor Rice (vocals, guitar), Kelcey Ayer (vocals, keys), Ryan Hahn (vocals, guitar), Matt Frazier (drums), and Nik Ewing (vocals, bass, keys)] return to the methods of their 2009 debut Gorilla Manor, but with the bonds of their union fortified and with the growth of wisdom accrued in the studio and on stage in front of millions of worldwide fans.

“The record is about us reconnecting to playing off of each other,” states Taylor. “We didn’t go into separate corners, produce our own songs, and bring them to the group. Back when we made Gorilla Manor, we lived together in one house and made a frantically creative environment. This time, we were in a massive warehouse with Shawn, jamming, and relying on each other often until three or four in the morning for several nights straight. It was fun, but also pushed us to outdo each other. We got back to our strengths. We’ve always been super collaborative and democratic, as we have three songwriters and singers, and all five of us have a lot of creative input. This was the most collaborative and open we’ve been though. We were raw and vulnerable. It’s the first time we didn’t do any pre-production, we went in and built the record out of nothing.”

“Not only was the band at its most collaborative, we’ve never collaborated alongside a producer so closely,” adds Kelcey. “Shawn became like an unofficial sixth member. It was amazing to go that deep with him.” Everett did what the best producers are supposed to, getting the best dynamics out of a group of musicians who have been together a long time. “Taylor, Ryan and I worked together on the songwriting and lyrics, but Nik and Matt also contributed so much to this record,” Kelcey says. “Nik has beautiful lines and textures all over the album, and Matt’s drumming has never been better.”

In many ways, all paths converged upon VIOLET STREET. Prior, the group progressed their sound over the course of three full-lengths, the aforementioned Gorilla Manor, Hummingbird [2013], and, most recently, Sunlit Youth [2016]. The latter received praise from The FADER, Consequence of Sound, The Guardian, and more as “Dark Days” exceeded 45 million Spotify streams followed by “Coins” with 23 million Spotify streams. In between countless sold out shows and festival appearances – including a standout Coachella 2017 set – they’ve graced the stages of Austin City Limits, The Tonight Show Starring Jimmy Fallon, The Late Late Show With James Corden, and more. And they tested new sonic waters, recording a cover of Kanye West’s “Ultralight Beam,” which Complex called “beautiful.”

After the tour cycle concluded in support of Sunlit Youth, the musicians decided to go back to square one in 2018. Rather than separately write, track, and contribute parts via email, they congregated in person at Shawn’s studio and warehouse, rekindling their chemistry and nodding to a tried-and-true tactic employed at the start of their career.

“Writing and touring Sunlit Youth was pretty tumultuous for a lot of reasons,” admits Ryan. “We needed to come home and figure out how we relate to each other again. We talked about our relationships very candidly. Making new music together was a reset and a way to feel grounded in all the chaos around us.

That brings us to the album’s key question of “What keeps us grounded?” It comes to life in the swooning delivery, shimmering keys, and airy strumming of “Café Amarillo,” which speaks directly to the central theme of VIOLET STREET. “With all of the chaos in the world, where do you find your shelter?” asks Kelcey. “For me, it’s the shelter I share with my wife when we’re together. It’s our love.”

“Lyrically, the one thread between all ten tracks is shelter,” Taylor elaborates. “Of course, we have relationships with our significant others, but we also find shelter in community, friendships, and the band. They are at the heart of VIOLET STREET.”

Sonically, shelter assumes many different forms. Powered by a healthy helping of slide guitar courtesy of Ryan, “Someday Now” channels the energy of “a haunted Hawaiian film noir party.” Then, there’s “Shy,” which swings from “swampy jungle” drums into a danceable groove punctuated by a “wild Tusk-inspired horn section like a Marching band freaking out.” Three- part harmonies take flight on “Garden of Elysian,” while the finale “Tap Dancer” culminates on resounding piano waltzing towards a heavenly and hypnotic send-off punctuated by otherworldly voice transmissions. Lyrically, “It’s about tapping into those pure feelings and emotions, before the noise of the world distracts you,” says Ryan. “You’re getting back to a simpler place and having perspective and childlike joy.”

With Shawn as the “total genius mad scientist” at the helm, the musicians pushed themselves to refine their vision like never before. Widening the sonic palette, they played a series of avant garde and classic films in the background to draw inspiration, choosing ranging from Kurosawa samurai films, Drive, and Citizen Kane to Endless Summer and the work of Alejandro Jodorowsky. As a result, “it elevated the songwriting,” according to Kelcey. Ryan laughs, “We took some pages from the Brian Eno playbook”

The music evokes an expansive scope introduced by the lush guitars, iridescent harmonies, and paranoiac pop vocals of the single “When Am I Gonna
Lose You.”

“I got married last year, and ‘When Am I Gonna Lose You’ is the zig zagging, arduous journey for me to get there,” says Taylor. “I found myself in an amazing relationship, but I always felt like it was going to go away, fall apart, and crumble. A never-ending looping feeling in the back of my head that things can’t last, and the final leap it takes to get past that. It’s set in Big Sur on the coast, which was an important part of our story. I’m diving into murky emotions of anxiety and doubt in the middle of love and joy.”

Named after the Downtown address where Shawn operates his studio, the album encapsulates the spirit of the city in all of its widescreen splendor for the quintet.“Los Angeles is an important character in the music,” explains Kelcey. “VIOLET STREET embodied the space where we were able to make the songs and harness energy. Musically, we were both looking forward and experimenting, but leaning on time honored techniques as well. Similarly, the LA is growing and expanding culturally right now, but remains classic. Everything came to life in this place. All of our emotions and ideas were represented by VIOLET STREET.