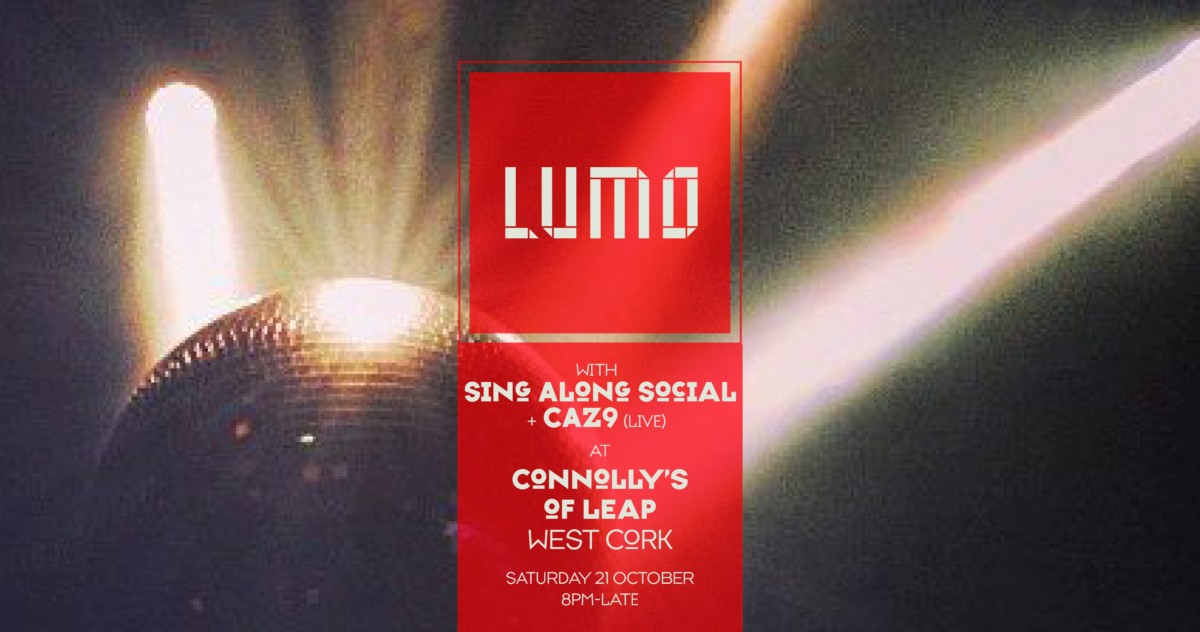 Our planned trip to West Cork this weekend has been affected by Storm Ophelia. Connolly’s of Leap has been left without power, water, comms. Roads closed. So we’re going to reschedule this til 2018. Good luck with cleanup Sam and locals.

After two brilliant years of monthly nights in Dublin’s Tengu, the club night I co-run Lumo is having a couple of birthday bashes in Dublin and Cork. On Saturday October 21st, we’re taking Lumo to West Cork for the first time and Connolly’s of Leap, a haven for music that we’ve been itching to get back to since this epic 2013 party.

Joining us in Leap will be inclusive singing party and commitment-free choir Sing Along Social pop battle roadshow & electro pop stylings of Caz9. Tickets €15 from the Dice.FM app, available for free on iOs or Google Play.

Lumo Club is a monthly house party in a club with no restrictions on genre run by DJs Nialler9, Simon Roche and Gavin Elsted. Now celebrating its second birthday, Lumo has been to festivals and venues all over Ireland, from Body & Soul in Ballinlough and Metropolis in Dublin, to Other Voices in Dingle. It’s missoin is to be an open club night where you will dance with friends, old and new. Lumo takes place monthly at Yamamori Tengu in Dublin and at once-off parties at festivals who value fun and dancing.

The Sing Along Social is a zero-commitment choir hosted by Aoife McElwain, designed for people who can’t really sing. It’s for the singers who were told to mime in other choirs or kicked out of karaoke bars for being off key. You don’t need to practice. You don’t even need to know the words. It’s about caterwauling along to some gas songs in the company of friends and strangers. Good singers welcome, too.They’ll be pitting some pop royals against each other in the ultimate Pop Royalty Battle. Think Whitney vs Mariah, Fleetwood Mac vs Abba and Prince vs Queen. Good singers are welcome, too, but this is more about a collective karaoke of craic than a solo performance opportunity.

Caz9 is an electro pop singer-songwriter from Dublin whose energetic live performances have been gaining attention since the launch of her debut EP in early 2017. ‘Phase II’ garnered praise for it’s vocals and production values, with RTE Culture describing it as ‘disco music for modern times’. Caz9 has been busy performing and promoting the EP, live and on the airwaves, throughout 2017. Meanwhile back at the lab, Caz9 has been writing, developing and collaborating on new tracks to bring to the masses in 2018. Having turned to music production little over a year ago, Caz9 has created an electro pop soundscape of heavy synths and layered vocal harmonies which she explores with a sweet sensual voice. Her singer songwriter background is evident in the musicality and poetic lyricism of her songs, but it’s the slow beats and brooding bass lines which make this storytelling to dance to.

Other Voices announces Belfast edition for later this month

RHA’s Hennessy Lost Fridays is back this week with Come On Live Long, Columbia Mills & more