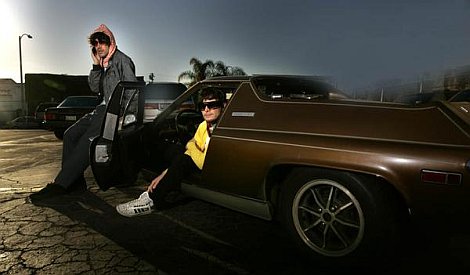 Boom Bip and Gruff Rhys are currently mixing their album under the Neon Neon moniker which will feature guests such as Yo Majesty, Spank Rock, Har Mar Superstar, Fatlip and the Magic Numbers. The album is based on the life of John Delorean, inventor of the “‘Back to the Future” car. Anybody at CMJ on October 18th can preview the album at a Lex Records party where Shape of Broad Minds will be playing live.

The rest of us will have to contend with a new song on myspace “Raquel”, an 80’s sounding romp about Raquel Welch in which Gruff lends an air of lamentation to the movie star’s life. Still, it now means after hearing just two songs, the Neon Neon album is my most anticipated of 2008.