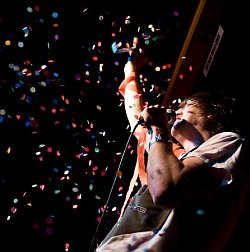 In which we sample a couple more of Melbourne’s venues and meet our new hero in the form of SPOD.

While we seemed to spend most of our time in Melbourne by taking in some amazing meals (the city is one of the best in the world for restaurants), a secret bar crawl (ditto for drinking), indigenous meat, vintage tours etc, we still managed to squeeze in gigs at night, on this occasion our gig was in The Tote Hotel in Collingwood. This two-storey venue and bar feels as revered as Whelan’s in Dublin to the locals here, with a rich history of alternative bands which have passed out on amps and joined the crowd in the sunken pit at the front of the stage. The pictures adorned on the walls tell us that bands like Fugazi and The Hellacopters have played here in the past 25 years.

In a city with a very young history, The Tote is steeped in it. The hotel is intrinsically linked to Festival Hall, a large venue in the city which we also visited this week. The story goes that an Irishman by the name of John Wren ran an illegal betting shop from the area called Totaliser in 1893 which is rumoured to house tunnels which run from the cellar of the bar to the bet shop. After making his honest illegal fortune, Wren put his money into entertainment and ending up buying the site that would later become Festival Hall in 1915. Now, a 5,000 capacity venue, it has been home to artists like The Beatles, Johnny Cash, Bloc Party and national electro heroes The Presets.

On the night we visited The Tote, it was the launch of Nightmares in the Key of (((((WOW))))), the new album from Perth band Tucker B’s who once supported Wolfmother on their tour of the country. They didn’t exactly endear themselves to the band’s straight-laced rock fans on that tour according to an interview in the local street press music publication InPress. We soon found out why. Appearing on stage in matching dresses, black leggings, socks over their shoes and Aretha Franklin on Inauguration Day head-dress, the band looked anything but a traditional rock band. Unfortunately, they sounded more conventional than they looked zany and little of what they played on the night was memorable enough to follow their support act, who as it happens was playing a Korg for the Tucker B’s that night. His name was SPOD, he was from Sydney and he was absolutely awesome..

SPOD claims he is “the raddest band on earth” and he certainly argues a good case. Coming on like Midnight Vultures era Beck, his lo-fi proto synth-funk hip-hop one messy dude show started with a laptop and Korg base and marinated it with audience hugs, whiskers drawn on cheeks, silly synth songs about cats, “fruity” songs about making you sweat and a confetti climax. We’ll be taking Spod home to Ireland with us to spread the word. He’s so good that Vice Magazine gave him 48 thousand million out of ten! I wholeheartedly endorse you check out his album SuperFrenz which I plan to pick up in Perth today. “Fuck Yeh!” as Spod might say.

Here’s a tune from SuperFrenz, video I recorded at the gig of the mentaller and an official video.

DEAD by SPOD – from the album Superfrenz (HD version) from SPOD on Vimeo.