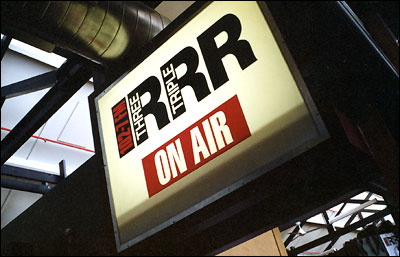 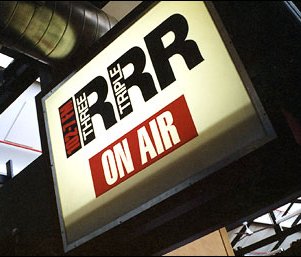 We wasted no time getting into the Melburnian muso mindset. A mere six hours after we touched down we had a meeting with the lovely, passionate folks at Triple R . This independent community station which first started broadcasting in 1976 is a shining beacon of how a radio station can become lifeblood to a city’s alternative music community. There is no playlist, no corporate sponsorship, no outside interference, the DJs play whatever they like at any time and say “fuck” an awful lot considering it was noon when we visited and heard the expletive on air a few times.

We met Simon Winkler and Jacinta Parsons from the station who explained to us (no doubt as we sat there with mouths agape) that the station is largely funded by its listeners in the form of subscriptions which they do a drive for for two weeks every year called the Radiothon. Listeners, Bands, DJs and local businesses are largely responsible for keeping the station afloat. Some even go so far as to subscribing their pets and their plants (the station has a popular gardening talk show as 30% of its programming is talk radio) to support it. Last year’s Radiothon added over 11,000 subscribers to the station. Add that to the government-funded and similarly non-playlisted Triple J and you’ve got a superior resource for alternative and independent music in Melbourne and the surrounding areas of Victoria.

The station moved home five years ago to a former lingerie factory in Brunswick East, about ten minutes on a tram outside of the city centre. The new home has afforded the station with extra space to play with and some of this space has been turned into a large in-house venue where all-ages gigs, radio sessions and live broadcasts take place. For a community station, it truly is totally involved in the local scene even going as far to delve into matchmaking – the upcoming Show Us YA 7 Inch musical-speed dating event pairs single music lovers up with like-minded Triple R subscribers. Everyone knows your music collection says more than you ever could about yourself in five minutes so Triple R are asking people to bring along their favourite piece of music – be it CD, cassette or vinyl to be judged by potential suitors.

It makes you wonder what we would have to do in Ireland to get a similar station? Is Ireland’s independent music community simply too small to warrant such a superior radio service? A lot of people in Dublin had high hopes for Phantom FM to represent the alternative but the pressures of the pirate-turned commercial station have veered it towards largely stagnant programming whose daytime playlist features the most middle of the road of alternative music. Would listeners, bands, DJs and music industry care enough to put their own hard-earned cash into a station like Triple R in Ireland? My gut tells me no but stranger things have happened. Just look at the response to the Road Records closure. There’s hope at home in Dylan Haskins’ imminent non-profit space Exchange too which has just got a space on Exchange St in Temple Bar. Exciting news.

We also got loads of local band tips and talked loads about the music scene in Melbourne which seems to generally reflect the fractured microcosm of Ireland and elsewhere. We’ll be doing a podcast upon our return which will feature the interview in more detail. To sum up Triple R in a word – inspiring.

A footnote on music media in Melbourne:
Coming from a place like Ireland where print magazines are dropping like flies and radio largely plays lip service to niche audiences, Melbourne is an eye-opener. Print is so strong here in Victoria for music enthusiasts. There are two free music broadsheets – InPress and Beat as well as the free hipster bible Vice. Inpress has operated here for 20 years while Beat has been operating for over 4. Both feature a nice mix of international and local Victorian acts as well as indispensible gig guides throughout.

Nialler9 in Melbourne – the pre-music menu