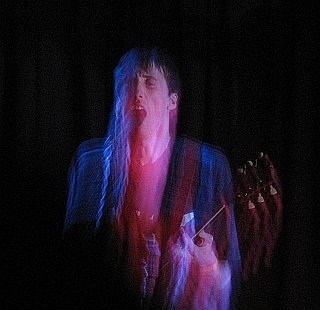 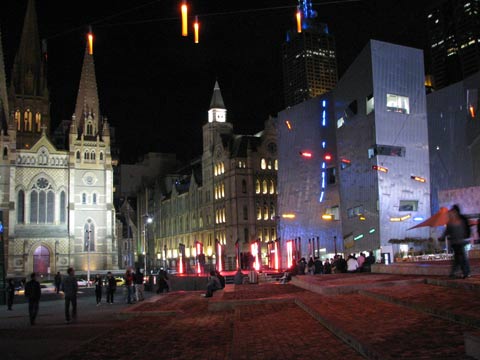 There’s probably no better way to blow away the cobwebs of any remaining jetlag the day after a 24 hour plane trip to the Southern Hemisphere than taking in Melbourne on the back of a Harley Davidson. On 9am on a brisk Saturday morning this is exactly how we conquered our body clocks the day after Aoife and myself arrived. It’s also a fantastic way to see Melbourne which was after all, recently voted the third most livable city in the world. Crossing the Bolte Bridge which encircles the Harbour and crosses the Yarra river, passing through the seaside suburb of St. Kilda and doing a quick lap of the official Formula One track around Alberta Park Lake was the best way to get into the Aussie mindset on the second day of our blog discovery trip.

We’ve only been here for 48 hours so far but already we’ve punched some serious holes in our itinerary. Aoife’s been representing the foodies with two great meals (she’s already blogged about our first night in Taxi). Our motorbike chauffeurs dropped us off at the Queen Victoria Market (the largest of its kind in the Southern Hemisphere) where we were taken on a two-hour trip sampling the finest food that Australia has to offer from pasta to fruit to cheese to dips to wine and yes, we tasted some kangaroo and crocodile while there too (More on weird meats tomorrow).

Following that we went on an awesome awesome tour around Melbourne’s vintage shops in an old Fiat 1500 with two 50’s ladies and their chauffeur. The four hour tour took in bric-a-brac, vinyl, furniture, clothes, crockery, crafts, a toy shop, a medical/industrial-themed vintage shop and some hot winter punch in a brash indoor garden party public house inspired by a brothel owner and lady about town called Madame Brussels. It’s the kind of unique service that a large city like Melbourne lends itself to. Scattered all over the city are these amazing shops which you’d be lucky to stumble upon otherwise but these two ladies Lyn and Danielle are the perfect hosts for browsing and perusing such once-off boutiques. It was proper 50s chic. Plus, I bought this on vinyl in this shop which had thousands of 7 inch records. 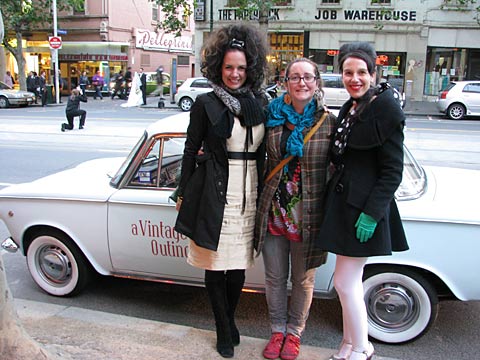 Lyn, Aoife and Danielle in front of the Fiat 1500 on the Vintage tour. Do you see anything else in the picture?

As for first impressions of the city as a whole – it’s got a bit of everything. An active music scene which my subsequent posts will delve into, a clean modern city, a respectful and friendly population, a high standard of restaurants, alternative and hipster areas in the suburbs and loads more. Culture and creativity seems to thrive here and is definitely encouraged.

A good example of this creativity is an installation currently running in Federation Square in the heart of the city centre. I was surprised and delighted to come across an exhibition by the wonderful United Visual Artists from the UK who have done visuals for Massive Attack and who were involved in the amazing video for Battles’ Tonto. Their latest work ‘Volume’ is sitting at the beginning of the public space and only debuted last week. It features LED columns which react to human movement and the soundtrack is arranged by 3D of Massive Attack and Neil Davidge.

Also on Federation Square in the building which resembles the Auditori at Parc Del Forum in Barcelona, Primavera fans we stumbled into this unexplainable performance art piece which had two guys playing guitar and synth while two dancers… just see for yourself below. You wouldn’t get this in Temple Bar folks!

Another video of a more cross-cultural street activity which marries techno and a didgeridoo to great effect on the streets. 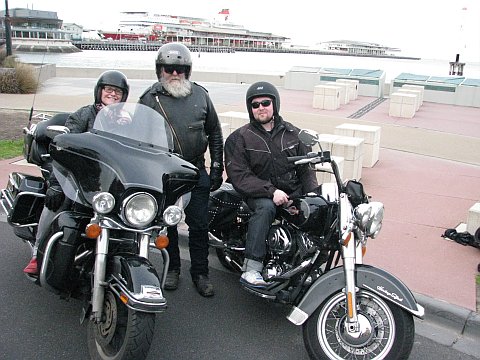 Aoife, Mick the real biker and myself in St. Kilda, Melbourne, Australia yesterday 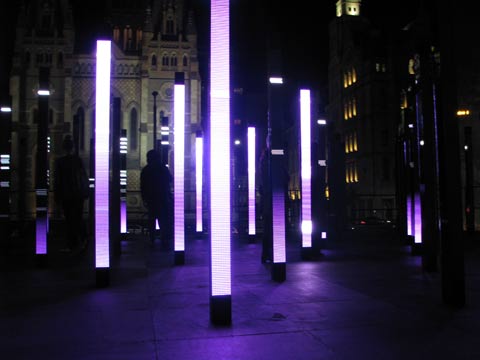 Don’t forget that you can catch up with the trip on Twitter in real-time.