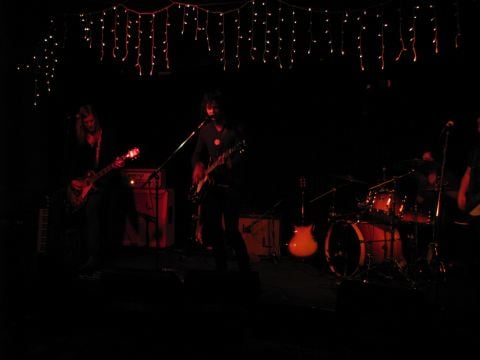 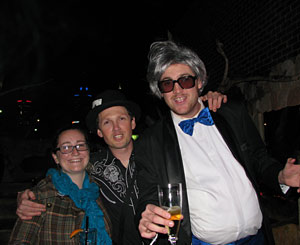 Aoife and the local entertainers Jon Strange the Magician and Johnny Deville, the cheesy Vegas comedian in Deville’s, Perth.

On arrival in Perth, our driver unwittingly paints a rather bleak picture of the capital city of Western Australia. Perth is a city with one and a half million people but as we enter the city centre, which is all tall financial buildings and clean streets, it seems like the entire work population is leaving the city for the suburbs where the majority of people in Perth live. The city is quiet by 7pm. The 3CD sampler of Perth music from the Western Australia Music Industry that welcomes us on arrival comes with the tagline “Music from the most isolated capital city on Earth”. Perth is also a super-chill place to be and that seems to extend to Western Australia as a whole – our taxi driver at one point, tells us WA stands for “wait awhile”.

That isolated sentiment was a negative that the city has now turned into a positive in recent years however as the city’s underground arts and music scene has kicked against capital bureauracy and cover band ubiquity to become one of the most active and coolest places in Australia for music. Culture may not be as visible as it was in Melbourne but in the suburbs and through cracks of the city, an active music scene is present with a lot of passionate people eager to make it become more salient.

Our primer on Perth music came in the form of the film Something in the Water which by and large looks at the pop-rock mainstream exports of the region. The film and many of the artists interviewed were mainstream acts and the main thrust of the argument was that these bands were successful because they had established themselves outside of the region, surpassed the cultural cringe of being from WA and therefore gained acceptance at home and abroad. From the beginnings of WA punk in the form of The Victims and The Scientists to the 80’s sounds of The Triffids, to 90s bands like Jebidiah and on to noughties bands like The Sleepy Jackson (Luke Steele who goes on to form Empire of the Sun), Eskimo Joe, The Panics, Little Birdy, John Butler Trio, Gyroscope and The Kill Devil Hills. Similarly, many of these bands touted suburban ennui as the main reason for starting their careers. These groups laid the groundwork for the current crop of bands as is quoted in the film in reference to the early music of The Victims and The Scientists: “After punk, it became OK to write your own songs.” The film focused on those who signed to mainstream labels and neglects to mention the active drum and bass scene in the city from which Pendulum was born.

The next night, we also got a chance to meet up with Dave Miller, a member of our favourite Perth-related band Pivot. In between DJ sets in a basement bar, where one rowdy reveller calls it upon himself to present a raffle and insult his ex-girlfriend and friends, Dave, who is now based in London, gives us a brief overview of Perth from an alternative musician’s point of view. It appears that dance and electronic music is thriving here just as much, if not more than indie acts. Dave’s friend and radio presenter Ben who runs the electronic night Move has brought Flying Lotus to the city and this Saturday will bring Kode9 to Perth for a Red Bull Academy interview and show.

We needn’t have worried about the lack of options for entertainment as Perth and its looser cousin city of Fremantle 19km away have plenty to offer. While we were there we took in some quality food (see Aoife’s image-heavy post), a tour of Little Creatures brewery and samples of tasty beer, an insightful exhibition into Australia’s finest musical export Nick Cave featuring his own contributions in the form of clothing, scrap books, handwritten lyrics and unseen footage, a visit to Fremantle Prison (available for weddings folks!) which only closed in 1991 and had a freaky execution room and the beautiful Kings Park & Botanic Gardens with an insightful Aboriginal guide.

In between of course we checked out some gigs and met up with people like Paul Bodlovich of WAMi and Julian Tompkin of Sunset Events – industry figureheads in Perth attempting to establish Perth further on the musical map, Bodlovich in an FMC-like capacity offering advice and resources for artists and Tompkin in an event capacity attempting to bring a SXSW-style festival to the Southern Hemisphere called One Music Movement that would serve as an industry go-to for Australia and Asia.

There is a swell of alternative independent bands coming up in Perth and we caught a trio of excellent local acts in the Norfolk Hotel in Freo (that’s Freemantle in localspeak); the fun time rock and roll riffage boys The Scotch of Saint James (photo above) with a cracking drummer, the youthful yet wise beyond his years Timothy Nelson with his fragile songs and the accompanying Ambrosia Ensemble string quartet and The Silents – a psych stoner jam rock group.

The Scotch of Saint James – The Happy Peacock

On our last night in Perth, we were kindly shown around by Dave Cutbush (Cutter to the locals) who gave us a tour around the awesome RTRFM, a community radio station with a similar subscriber setup to Triple R (see my thoughts on that here) but perhaps with a more eclectic programming schedule. We were also interviewed on air by Danae Gibson – the MP3 is below of that from RTR’s website. We were glad he offered to bring us around as we made to to the coolest bar in Perth – Deville’s – a “kitsch, hell-themed Wonderland, a Las Vegas style supper club and bar straight out of an old Elvis or Barbarella movie”. The interior is all lava, wrought iron and there are projections of old movies on the walls. It was designed by the owner Josh, a former film set designer with a rockabilly quiff and an English accent. The entertainment ranges from go-go dancers to belly dancers to rockabilly and ska bands to comedians and magicians roaming the crowd. The place was awesome and if you’re ever in Perth, you should definitely go there. We did catch another gig after this but more about that one in the next blog post as the band were really bloody good. 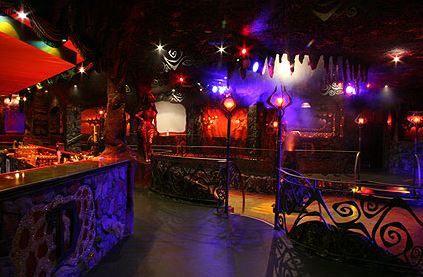 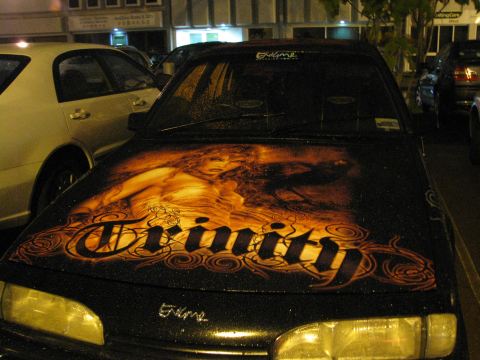