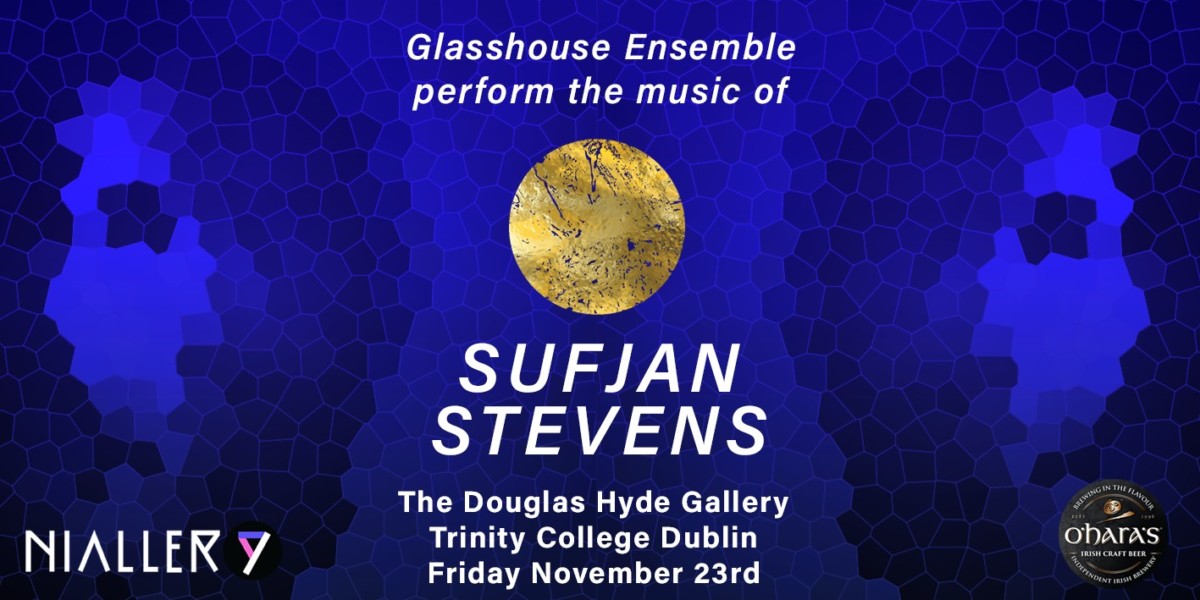 Nialler9 is proud to present Glasshouse performing an evening of the music of Sufjan Stevens to mark his solo gig 14 years ago in the very same venue. Join us in the unique space of The Douglas Hyde Gallery in association with O’Haras Irish Craft Beers for a very special evening, with rousing performances to lift you. Featuring an ensemble of 11 with choral accompaniment and striking visual installation, you can be sure this will be a night to remember.

Early and late bird tickets are already sold out but regular tickets are on sale at €18 + VAT and Eventbrite fees of €6.18 so total cost is €24.18.

Each ticket comes with two complimentary drinks courtesy of O’Haras on the night.

Glasshouse’s previous performances of Sufjan’s seminal 2005 album Illinois were all sell outs and for this event, expect music drawn from his entire catalogue.

Sufjan Stevens is an American singer-songwriter and multi-instrumentalist. In 2005 he released his highly regarded concept album Illinois which spans a variety of themes and musical genres.

Glasshouse is a Dublin-based music ensemble who present performances of popular contemporary music in singular locations.

“Broderick’s voice, full of emotion and boasting a gorgeous range, perfectly captured the vulnerability of Stevens’ lyrics.”
– The Thin Air, Another Love Story 2018

“In these unsettling political times, it is a joy to welcome uplifting work from another, somewhat distant, Atlantic island and also to take pride that it was performed in Ireland with such commitment and style.”
– praise for “…and they have escaped the weight of darkness”, December 2016