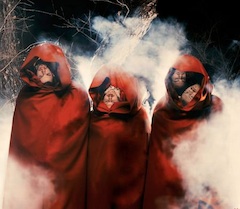 Yeasayer (somehow pictured) is the big gig for me this week. Some great lineups from Wednesday’s Haiti Fundraiser to the Young Hearts Run Free BYOB gig on Saturday to the NME Awards show on Sunday. Loreana is putting on an interesting night of Yacht Rock on Thursday while a few of gigs are happening I was completely unaware of this morning: Fake Blood, Boy 8-Bit and Crystal Fighters. Wretch-rock purveyors Xiu Xiu play on Saturday. Check out their horrible video below. Sample MP3s below too.