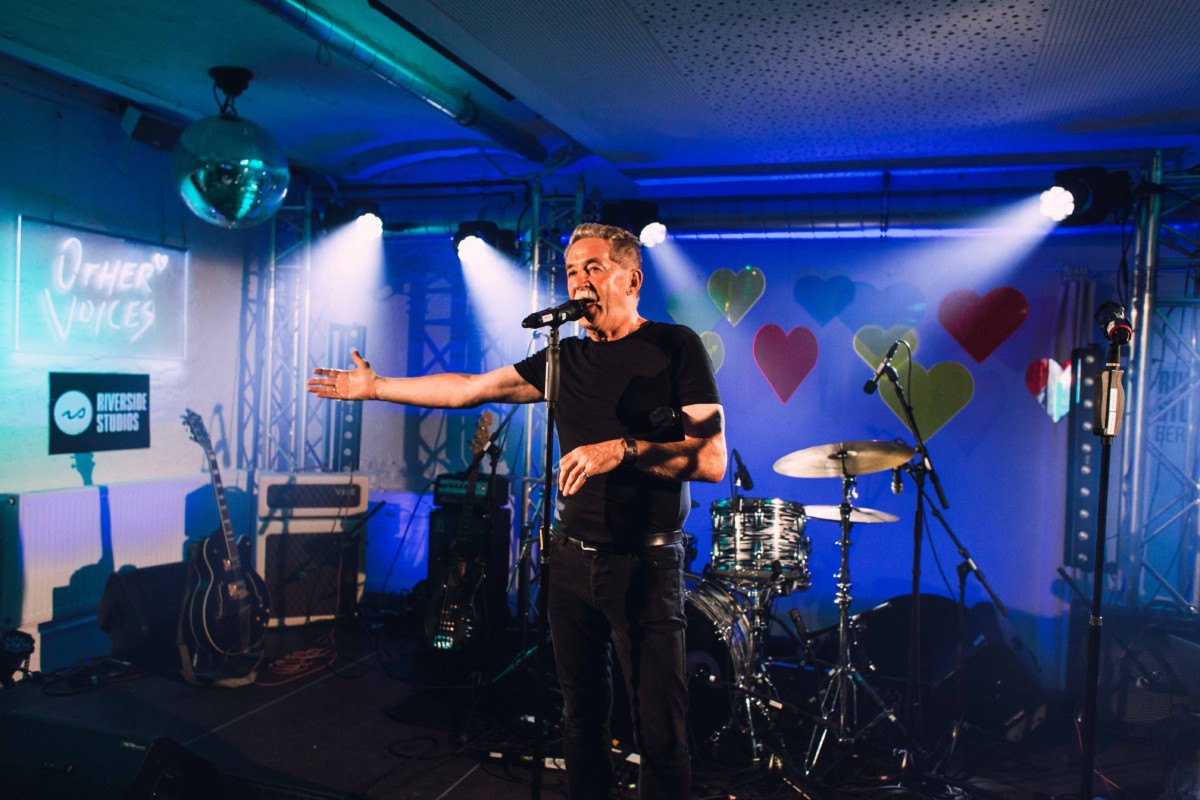 Arcade Fire announce UK and Irish In The Round shows

Following events in London, NYC and Austin, Other Voices travelled to Berlin last week for its first German excursion as part of Tech Open Air interdisciplinary festival. The evening took place in Kreuzberg’s renowned Riverside Studios, just a stone’s throw away from the longest remaining section of the Berlin Wall. The studio is the working environs for over twenty musicians including Booka Shade, Pan Pot and Victor Van Vugt.

Following dreamy, atmospheric indie-rock from the Cork band, audience members were introduced to a new group by the name of Them There. The band comprised of industry stalwarts Craig Walker (Power of Dreams) and Pheobe Kildeer (Nouvelle Vague), both of whom live and work in Berlin. The duo recently penned a track called ‘Fade Out Lines’, which has already reached the number one spot in Germany, Spain and Hungary, to name a few.

Attendees were guided into ‘The Piano Room’ for intimate sets from Caoimhín Ó Raghallaigh and Berlin-based Tom Adams. Caoimhín is no stranger to German crowds having played the country’s biggest philharmonic concert halls with The Gloaming, but there was something very special indeed about hearing his spellbinding music for solo violin in a small room right on the banks of the river as evening fell.

Tom Adams sat down at the piano to perform music from his debut album Silence, including standout tracks such as ‘Come On, Dreamer’. Adam’s falsetto voice and delicate, minimalist piano made for a simply beautiful performance that would no doubt appeal to fans of Nils Frahm, with whom he shares a manager.

The excitement surrounding Soulé was electric as she arrived in Berlin for her first international gig. Her infectious energy and upbeat tunes such as ‘Good Life’ and ‘Trouble Maker’ got everyone on their feet and judging by the audience’s reaction this won’t be her last booking outside Ireland.

Just before New Jackson, Ambassador Michael Collins took a moment to say a few inspiring words on Creative Ireland and the importance of supporting and encouraging our brightest talents on the global stage.

Finally, giving a nod to the city which was once home to David Bowie and its thriving electronic scene – New Jackson brought the evening to a close with a sample of ‘Sound & Vision’ and tunes from his excellent new album ‘Night to Night‘. A memorable gig from a producer and musicians who has gone from strength to strength in recent years.