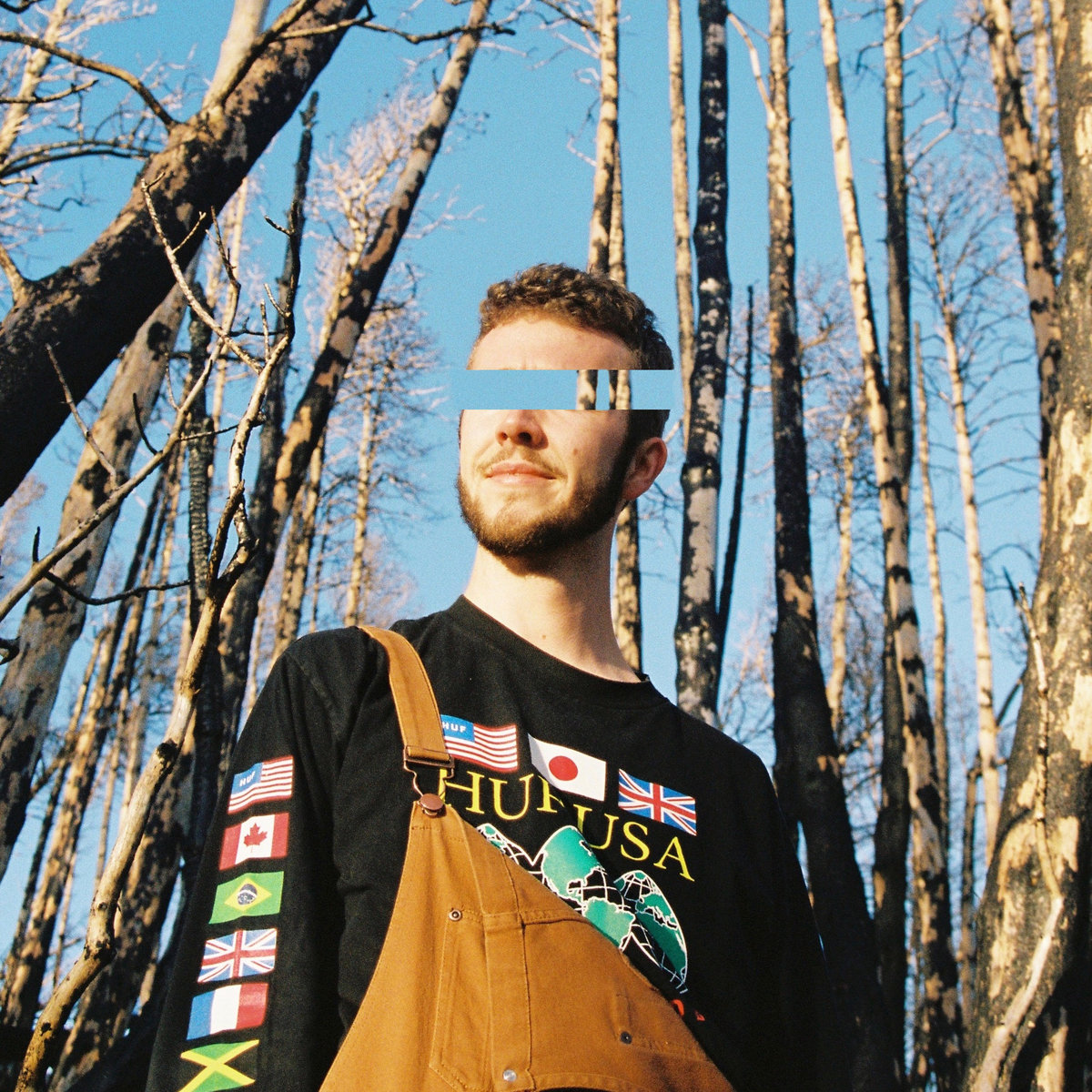 The Heat Death of My Hometown is largely an electronic instrumental album that serves as a base for a journey through the city, memories of the past, or turning points into the future.

Snatches of conversations about having your house “sorted til November” , the nonsense talk outside a chipper at 3am, the sound of the DART coming in and out of the city, the words of Emmet Kirwan’s character in Dublin Old School extolling the virtues of late night sesh plans and nights out are weaved throughout the album’s narrative.

The music holds a chaotic energy and captures the anxiety of a precarious living experience that many of those in the twenties, thirties and forties, will recognise as their own.

The Heat Death of My Hometown is an album with a concept that is familiar to us all living in Dublin. I asked Matthews some questions to get more perspective on the project…

Thematically, there is a lot to unpack around the idea of gentrification,  the erosion of cultural spaces, high rents etc – but what is constant is the precarious nature of living in Dublin right now. What is your experience of it?

So although I have lived in a number of overpriced lunchboxes with mould on the wall and with multiple illegal rent hikes, I didn’t (and still don’t) want to portray my personal experience of gentrification in this album. I am using Jimbo as a mirror for how so many of us feel in Dublin, and through him, I am showcasing all the different facets and contributions to gentrification and emigration in this city – whether that be from the perspective of the developer building luxury apartments, or the scabby student surrounded by a wall of cans, or the likes of AirBnB taking up property that could be used for housing and not holiday homes.

How did the theme inform the music you created?

I initially wrote 75% of the songs that are on the album before I had any notion of turning it into a concept piece. Only after I had collected these tracks and looked at them more holistically did I realise there were these unifying themes and anxieties forming an undercurrent throughout. At this point I started doing a lot of research into gentrification, as well as investigating other concept albums and why they were so effective. I finally came across Joseph Campbell’s “hero’s journey” and realised that my favourite concept albums all have this structure. At that point I started piecing together field recordings and I wrote “Almost Post Coital” and “Fear of Cranes” to really cement the narrative. Originally “Fear of Cranes” had about 7 verses in which I referenced the majority of what I found during my research, but I think cutting it down was the right choice, it is heavy enough on the listener as it is!

You can’t currently play this album live, do you have plans for it? Where is the ideal venue given the themes of the album?

I do have big plans! I am currently on the hunt for a visual artist to put together a kind of reactive live show, kind of like how Floating Point’s visuals for his RA show were synced with the oscillators and envelopes. I want the whole experience to be this beautiful coupled link between the music, the visuals and the crowd.

Probably the spot that is most in line with the themes would be the foyer of the new hotel that knocked down The Bernard Shaw…or Hangar…or District 8…! In all seriousness I would love a little tent at a festival to get real sweaty in. Festivals have always been a place where new ideas and music are so easily stumbled open.

You’ve got some well-known voices of the city (Emmet Kirwan, Kojaque, Una Mullally) in there – other than anchoring and commenting on the place – why did you want them on the record?

I massively respect and admire the work they have done and continue to do. I wasn’t throwing them in their for tactical clout, more so I had sampled them due to admiration and those songs just happened to make the cut. I also think it was both fortunate and significant that these creators from different spheres (poetry, theatre, comedy, music, journalism) all agreed to lend their voice. This for me was really reflective of how widespread these frustrations are, further emphasising how any of these voices could embody Jimbo.

What problems does Dublin have that are unique to it that you think need to be tackled now?

Gentrification is somewhat a symptom of globalisation and austerity among many other things, so it’s not surprising to find it running rampant around the globe. What is unique to Ireland’s situation is the socially blind property developers and the presence of big tech. Firstly, these developers have almost exclusively been developing high end property. In addition to these developments being more profitable for them as compared to social housing, it also bring up the mean price of the housing market, inflating “affordable” housing. On top of that, without social housing being built, there is increased scarcity but still the same demand, further worsening the problem.

Secondly, the likes of big tech taking advantage of the tax haven that the government so eagerly defends, again, creates massive inflation for the locals. The workers from these companies can afford the high price in rent and maintain the demand for luxury apartments. Not only that, but the tax these companies should be paying (Facebook only paying 0.7% in 2018 for example) could be used to build social housing, but instead stays in the pockets of the wealthiest, further contributing to the wealth divide. These forces ultimately drive the youth of this country to emigrate to a cheaper city, dissipating our more progressively-minded presence. All of this creates a feedback loop which is only going to accelerate these problems unless the parameters are changed.

What facilitates this strain of cowboy capitalism is short sighted government legislation, as so clearly seen by the current bill in the Dáil (the LDA bill which will allow developers privatise public land, resulting in a big cash cow for them, and further scarcity for us). Ultimately the people have the power to change this systems, by using their voice and using their vote.

Community Action Tenants Union (CATU) is a people-powered tenants union  who have gained a lot of members in the last year from people who are fed up of the way things are in terms of living situations – you’ll be donating the money from the record to their cause – does what they do point the way forward?

I believe it does point forward. Not only do they give support for those in dangerous situation with parasitic landlords, but they also educate tenants. While they do give emergency aid (for example with illegal evictions), they also give developmental aid educating and creating community. I believe that this developmental aid will ultimately create a more informed and connected population which will hopefully elect people that will deliver on what they say rather than continuing the string of empty promises that we have heard for years and years and years.

There’s a fair amount of socially-engaged Irish music out there at the moment, what’s chiming with you and why?

There is indeed and it’s great to see! In terms of a socio-political aspect I am a massive fan of Gemma Dunleavy, For Those I Love and Kojaque. They are showing a perspective that often gets villainised by public stereotypes and I think it’s really important to hear those stories.

In terms of the conversation around mental health, Girl Band are one for me that are so raw and unapologetic. Dara’s lyrics perfectly resemble all the ramblings that go on in my head. Their last album kinda floored me with both the production and the push and pull nature of their song writing. I have sampled them a bunch of times now but I really want to make something deadly before I ask for their permission to release it. For Those I Love obviously also writes a lot about mental health, and yee, I bawled my eyes out at his Other Voices performance. Incredible stuff!

What do you think about the proposed changes to nightlife licensing ?

I think it is an incredibly promising step forward. In addition to reducing the traffic in the Grafton St. McDonalds (which all chicken nugget fans will appreciate), I think the most important aspect comes down to the pure fact of there being more time. An event can experiment at off peak times, letting curators play with line ups, genres and even the form in which the art is being showcased. That experimentation, and the cultivation of this experimentation, is without a doubt going to create new conversations and ideas which I feel could trickle down into other aspects of society and change the way everyone – not just the club-goers – lives their life.

Buy Jimbo Jones’ The Heat Death Of My Hometown on Bandcamp.