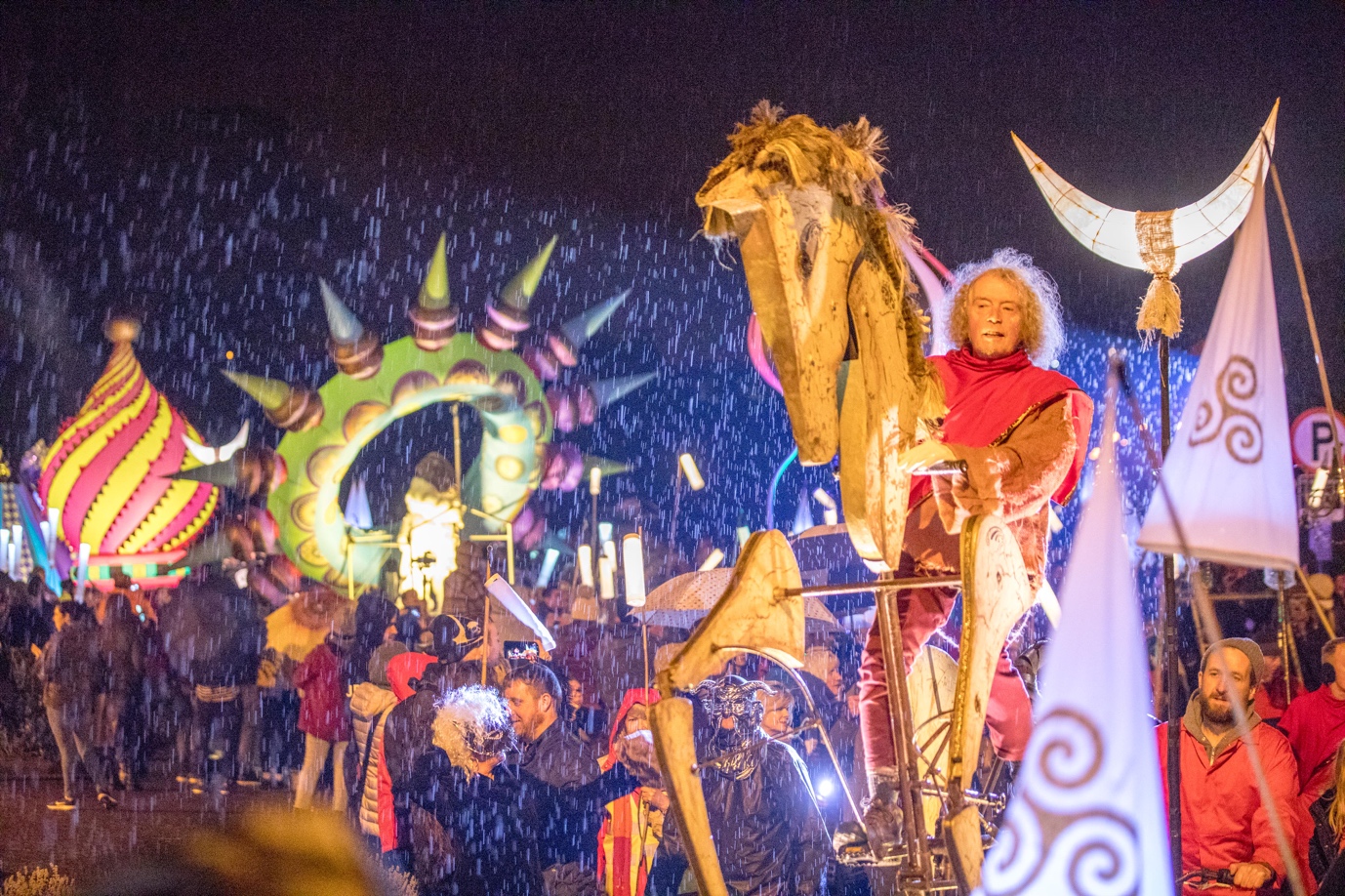 If you’ve been keeping an eye on our social media over the past few days, you’ll have no doubt noticed we attended the first Púca Festival over the weekend.

A collaborative endeavour between government body Failte Ireland and event organisers Curated Place, Púca aimed to celebrate the festival of Samhain in three distinct locations around Ireland’s ancient east through a weekend of music, feasting and cultural heritage.

We tagged along for the proceedings in the grounds of Trim Castle, meanwhile, celebrations continued at Drogheda and the Hill of Ward, Athboy.

These three locations are fitting, as the festival of Halloween is widely believed to have begun in Ireland’s ancient east.

If hosting the festival in three separate locations simultaneously marks out Púca as unique among the standard practice here in Ireland, so too was the heavily multi-media focus throughout the weekend.

Trim Castle was loaded with enthralling sights. Daring aerial acrobatics from performance group Fidget Feet held audience groups with mouths agape. Young children couldn’t peel themselves away from the barrier separating performer from audiences, their breaths condensing into vapour against the cold night air while the Limerick-based aerial performance group constituent members twisted and turned 15 feet in the air.

A sure highlight for all who attended this year was the Castle Keep audio-visual illuminations from UK based group Illuminos .

This installation really struck at the core of cultural ambition which underlined Púca. A sturdy queue (which I happily waited in) offered plenty of time for anticipation to build. Taking groups of 15 and 20 at a time around the ancient castle grounds, our guide literally & figuratively walked us through Irish spirits of Halloween.

As we moved around the castle, audio-visual projections showed us glimpses of the mischievous Red Men, or the protective Fionn mac Cumhaill. The tour culminates in a 10-minute cinematic display, offering audiences a visual representation of each of the five Irish Samhain spirits’ personalities.

This was all bolstered by a stunning ambient composition from Matthew Nolan. It was, without a shadow of a doubt, the most high-fidelity production of its kind I’ve ever witnessed. The animations were fluid and life-like, with colourful palettes for each individual spirit rendered in magnificent high-definition.

My smile lingered long after we’d exited the installation.

In the midst of Spirits and aerobics, a man beckoned us over to an unassuming stall. He asked me and my girlfriend to put our heads into what looked like the very end of a masseuse’s chair. Trepidation put to one side, I did as was instructed and was delighted to see my computer-generated face projected onto one of three 6 foot structures.

Not just that, my animated face began talking in an Irish accent not quite my own. The installation is called The Tale of Dullahan, designed by Impossible Art. Three computer-generated heads (from willing audiences) take turns in telling the tales of Dullahan, an old Irish story which explains the origins of the headless horsemen. Another spooky tie to Irish mythology much enjoyed by families & festival-goers in general.

The sound was certainly not lacking throughout my experience of the weekend at Trim. Indeed, the entire town seemed to produce a descriable hustle and bustle for the full festival. These were crowned by the ticketed gigs held toward the end of each day. 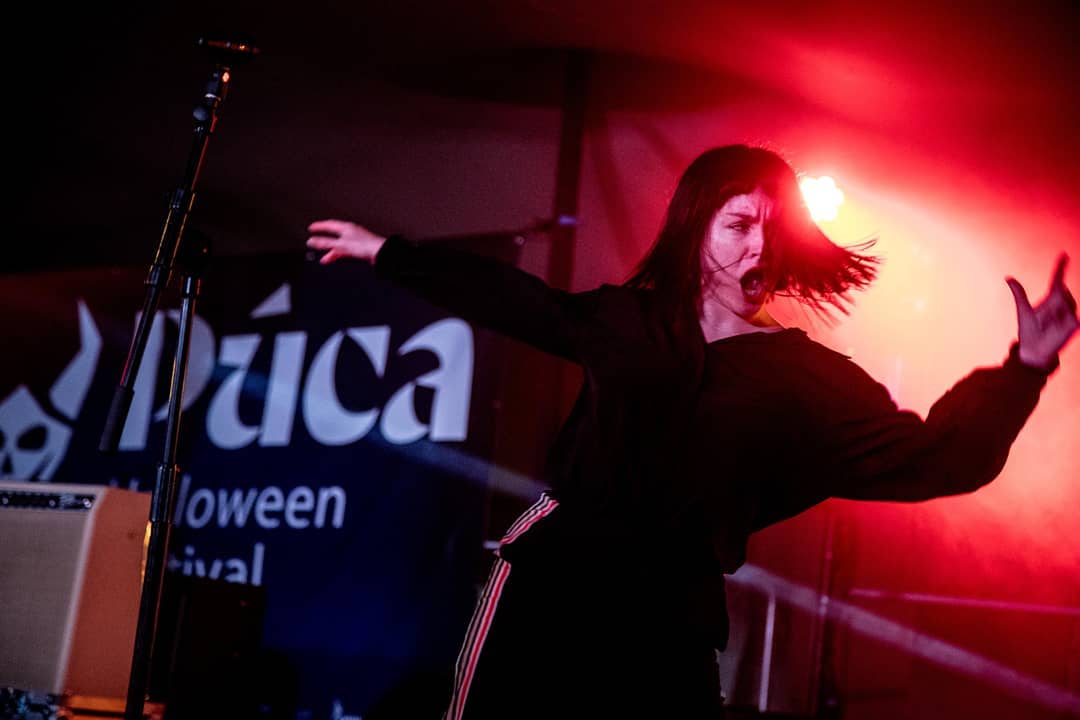 Friday night saw performances from AE Mak, Pillow Queens & Just Mustard as part of Breaking Tunes-curated affair. Here, all female-fronted Irish bands championed a blend of old and new, gracing an ancient tradition and festival with some of the strongest contemporary art currently emerging from the country.

Just Mustard’s set served to reinforce with steel beams that the post-punk band are one of the nation’s very best. Maybe it was that the dark night and, somewhat, spooky setting lent itself to the band’s wall of feedback and distortion, but the set was properly engrossing.

Saturday night heard producer, composer and DJ Kormac perform alongside his big-band and Irish Chamber Orchestra. Unfortunately, persistent rain and structural damage to the tent meant that the gig had to be (correctly) pulled about five songs in.

Crowd safety has to come first, however, those four or five tracks audiences were lucky enough to hear were excellent – blending aspects of electronica, classical and world music into one cohesive sound seemingly larger than life.

Púca’s first year was an extremely positive affair. The move to establish cultural hubs outside of Dublin is the right one. A family-friendly ethos gives the festival a dynamism and inclusivity, as too does its either very cheap or totally free events and installation.

The festival is a welcome and unique addition to the already rich selection of weekend affairs here in the country, We hope Púca returns to the triumvirate towns of Halloween’s spiritual home in 2020.