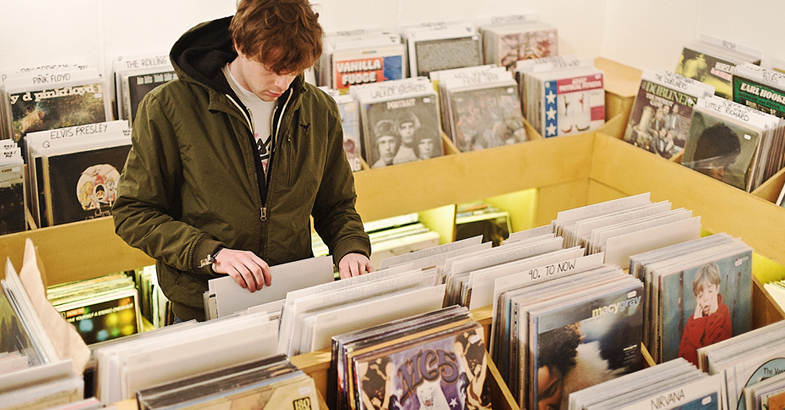 There’s a growing dissatisfaction around Record Store Day. The event’s initial soft glow of warm limited vinyl purchase-opportunity has dissipated in recent years as the day has been flooded by ulterior interests.

Conceived in 2007, Record Store Day’s intention is to shine a spotlight on the humble independent record shops around the world that are weathering a sustained period of change in music purchasing.

From Napster to Bittorrent to iTunes to Spotify to freely available downloads of music online, the day is intended to provide a jumpstart to the shops who very often, lack a up-and-down cash flow, as albums and records compete within a more fractured world of entertainment.

Record Store Day intended to give the music communities around these shops an event in which to celebrate those spaces, many of which have disappeared in today’s tumultuous environment.

The problem happening around Record Store Day currently isn’t really the fault of the shops themselves but the organisers of RSD have to be careful about the backlash which is starting to come from the people it’s supposed to be helping.

A growing number of labels are giving out about not being able to get their releases through the pressing plants because of a huge demand for manufacturing.

A flux of anything-goes RSD releases (there are a whopping 634 releases counted on the site this year) that have included B-side collections, live albums and promo singles for forthcoming albums that come at exorbitant prices from regular releases and are arguably, just released for the sake of rarity collectors and marketing, doesn’t help matters. It builds the bitterness around the day, when it’s supposed to be about the music (shops), man.

That flood of inferior product into shops doesn’t have to be bought by customers of course. The music fan might end up picking up something on impulse (I still can’t quite explain that Crystal Castles 12″ I bought on Record Store Day, a few years ago).

For first-time vinyl buyers, it might hinder their desire to pick up more vinyl on the 364 other days of the year though, when they buy something which turns out to be a bit shitty and was for collectors only. But that decision is up to the customer.

That flood of inferior product on Record Store Day is bought by record shops in the first place though as it’s expected by customers. While Record Store Day has undoubtedly been a big financial boost for shops in the cash flow stakes, there’s always the danger that those limited vinyls will be left on the shelves for months after that Saturday in April, because outside the FOMO day no-one really wanted them.

More pertinent for the shops themselves, the Record Store Day exclusives are often not sold to independent shops on a “sale or return” basis meaning that they can’t send them back to the distributor as with lots of regular releases. They spent money on limited vinyl they are burdened with and that they can’t shift. It can be argued that a good record shop knows its customers well enough to know what to get but even those shops who have buying stock down to a fine art, that people actually want, can struggle with excess amounts of releases on shelves on a day like RSD.

Similarly, the argument from small labels that the bottleneck at vinyl manufacturers is caused by those plants giving priority to major label RSD releases and is shutting out the small labels could be countered with the fact that RSD has been growing year on year since it started so those small labels should factor this into their release schedules.

Still it can’t be easy for the one or two person hobby operation to hold on to that cash for a release in the face of the muscle benefit of labels clogging the plants who are opportunistically releasing 5000 Katy Perry’s picture discs, 6000 copies of a live Jimi Hendrix album or 2500 copies of a Jay Z/ Linkin Park 12″.

All of this adds up to a lot of negative chatter about releases and the mechanisms of the music being released, which dilutes the actual expressed intent of the day – “to come together and celebrate the unique culture of a record store and the special role these independently owned stores play in their communities.”

Locally last week, it was record bags at dawn with Tower Records calling HMV’s plan to hold a “Record Shop Celebration” sale with discounts on their vinyl selection on the day of reopening on Grafton Street as “cynical”. It is a bit of a dick move on HMV’s part (who are owned by Hilco) to capitalise on a day celebrating independent record spaces with an unofficial celebration of their own.

Then The R.A.G.E./Record Spot in Dublin got involved in a Facebook post that suggested Tower weren’t indie enough to be lobbing out such accusations (in fairness to Tower, it has been independently owned for 10 years or so, since the franchise shut down in every country but Japan and Mexico) but such quarrels only add to the bitterness around the day and don’t help the snob factor that’s frequently placed on small independent music shops, by those that don’t feel cool or “indie” enough to shop there.

Imagine it was International Coffee Shop Day. I view choosing to support HMV & Tower on April 19th as the equivalent of not recognizing all the great little independent coffee shops in Dublin and celebrating the day by purchasing a cup of coffee in Burger King because of a 40% coffee sale or getting a cappuccino in O’Briens, because it’s “Irish”.

The points about Record Store Day releases ending up on eBay within minutes are mostly correct though, that is a cynical move that only adds to the problem and discourages positive participation.

Elsewhere, the co-opting of Record Store Day is less calculated. Now in its third year, Record Store Gay raises funds for Outhouse, a vital LGBT resource centre in Dublin by hosting a live event in the space and releasing a compilation of covers by Irish bands like Le Galaxie, Sleep Thieves, Cave Ghosts, I Heart The Monster Hero, Patrick Kelleher, Bouts and The Late David Turpin (hear it here before Saturday).

But by putting the event on during the day of RSD, Record Store Gay could be said to have a negative impact, as it brings focus and footfall away from the remaining independent shops which the day is there to support.

The organiser, Andy Walsh says that Record Store Gay is a good thing for RSD. “By approaching the idea of celebrating our record shops and our musical culture from a different angle we have introduced so many people to RSD for their first time and also to many record shops that they hadn’t known existed,” he told me.

“We have also introduced new audiences to independent artists and alternative ways of accessing them,” he added.

Walsh says RSG supports the day by putting its compilation of covers by Irish bands into the record shops and encourages people to buy it there, if not at the event’s popup record stalls. Record Store Gay also put special ‘melody pop singles’ in independent record shops as an incentive for people to go those places.

“I personally have found RSD has become too exclusive and expensive for me to access in recent years,” explained Walsh. “That was one of the contributing factors for me in starting RSG and trying to make it an accessible and fun celebration of record shops and the diversity and variety of the music that they sell to us.”

Thankfully, there are a lot of actual events in the shops this Saturday with live musicians performing in the stores that are designed to do just that – make an event out of the day and to bring people into the shop to support these spaces. Just remember that these shops are open every Saturday, and most days of the week for the rest of the year.

Photo: Frank B in The R.A.G.E for Fáilte Ireland.

Drop Everything: A future island festival on the edge of the Atlantic