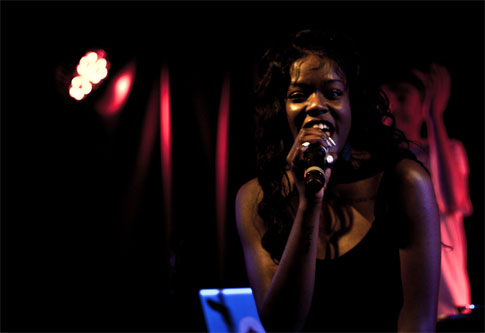 There’s no formula for hype but if you wanted a modern example of how to bottle it, Azealia Banks is it. In 2010, she was knocking out club rap tunes like ‘L8R’. Like Rye Rye and Yo Majesty! before her, it was fun but lacked a punch to take it to the next level.

Well that level hit 18 months on, when Banks debuted ‘212’ with the backing of a slew of producers like Lazy Jay, Lunice, Jacques Greene and Machinedrum, a deal with a major in Universal and hypehypehype galore. Last night was only the beginning. A Monday night sold out gig in Whelan’s Dublin served as a live debut for her as an artist, an introduction and a salivation of the hype that had already built. Azealia only needed to prove she was a) talented b) cool and c) good live (unlike the less than impressive Karl Lagerfield clip which appeared last week).

She was all of these things and didn’t waste time proving it in a 25-30 minute set taking in seven of her short songs so far. With just Montreal’s DJ Cosmo on the decks, the focus was on Azealia and she was enticing. She knew how to work a crowd, her rhyming was on point and the crowd knew how to work her, flattering her by knowing the words to songs like ‘L8R’, ‘Barbie Girl’ and ‘Runnin’ (a Lunice production). The only mis-step was an a capella version of Groove Theory’s ‘Tell Me’ . At six songs in, she played ‘212’ into The Prodigy’s ‘Firestarter’ and the room went off. Even as she asked “Is this the song you came here for?”, there was an equal mix of yes and no that indicated that even in the moment, the crowd weren’t just here for a one-hit wonder.

American rappers and MCs are always the ones leaving people feeling shortchanged when they come to Europe. Showcase gigs and personal appearances are more expected across the Atlantic than they are here and as such a set that lasts no more than 30 minutes is going to grate many especially when she didn’t play ‘Liquorice’ or ‘NEEDSUMLUV’. It’ll all be forgotten about, those present can say they were at one of the first Azealia Banks shows if they’re so inclined. While people might have been upset at the length of the set, no one was giving out about her lack of talent. What is clear, is that Azealia is ready and what better way to experience that than a mad burst of energy on a Monday night in Dublin?

Some clips from last night: