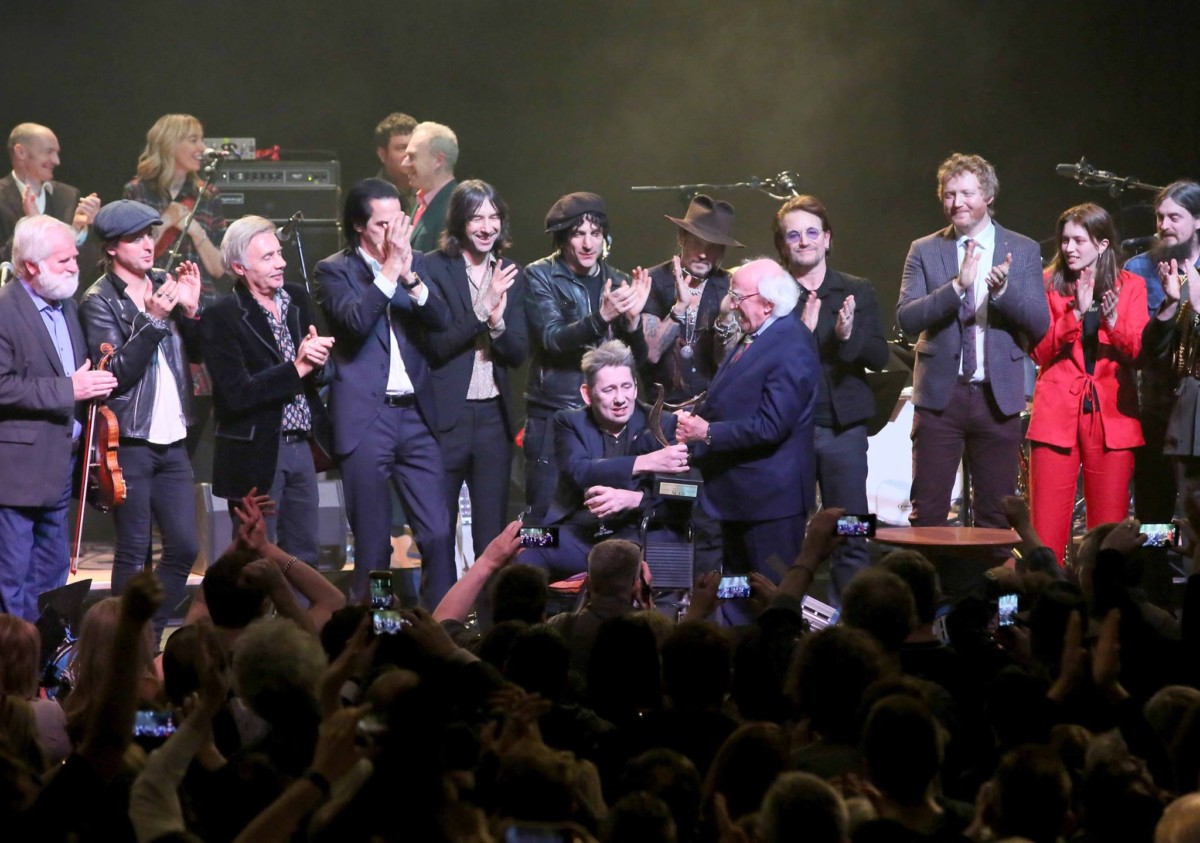 The National Concert Hall is not a place you’d square with the debaucherous life and career of Shane MacGowan. But, The Pogues singer was never one to sty inside the lines and the national venue is taken over for one night for a 60th birthday show in his honour.

As Damien Dempsey says on stage during his first of many rousing performances that runs for nearly three hours with an interval, “They said that Shane wouldn’t see 30, then 40, then 50, nevermind 60,” he said. “Betcha many of those people are dead now,” he joked.

On the night, a bewilderingly large cast of his friends and admirers (and the President of Ireland Michael D) assembled to sing his own songs back to the man who imbued Irish folk and trad with a punk verve and energy.

If you thought this was going to be a stuffy recital in Earlsfort Terrace, this is Shane MacGowan’s night. A three-song Pogues rock set from Glen Matlock of The Sex Pistols, Clem Burke of Blondie, The Pogues’ Spider Stacy and Jesse Malin opened the show with a bast and made it clear that this was to be no seated event.

The audience barely had a moment to sit down such was the excitement as each new performer appeared on stage introduced by broadcaster John Kelly. A conveyer of serious talent joined a house band featuring members of the Pogues including Jem Finer, Terry Woods and Cáit O’Riordan playing alongside Sharon Shannon, Steve Wickham of the Waterboys and more as a rotating cast of singers like Damo Dempsey, Nick Cave, Imelda May, Glen Hansard, Bobby Gillespie, Carl Barat, Camille O’Sullivan, Finbar Furey, Cerys Matthews paid tribute while upcoming and younger musicians whenyoung’s Aoife Power, Lankum, Cormac Begley and Lisa O’Neill did Macgowan’s songs in a respectful and capable manner.

There were the unlisted guests, of course.

Bono sang ‘A Rainy Night In Soho’ (and Johnny Depp did his noodly guitar thing with him), Dubliners’ John Sheahan added great texture to the night.

The highlights were many. Sinead O’Connor surprised all with a devastating performance of ‘You’re the One’. Cait O’Riordan returned the favour by singing ‘Haunted By The Ghost’ which O’Connor previously sang with MacGowan, Lisa O’Neill duetted with Terry Woods on ‘Streets of Sorrow / Birmingham Six’ and later, channels Kirsty MacColl on ‘Fairytale Of New York’ on a duet with Glen Hansard. Damien Dempsey gets the closest to Macgowan’s folk instincts on his trio of performances including the rousing drinking song ‘Sally MacLennane’.

The accumulative effect of established musicians performing whiskey-soaked hymns and jams, the gig feels less like a birthday gig and more of a funeral for Ireland, such was the ability of MacGowan to bury himself into the Irish psyche by writing spirited barstool songs along with insightful lyrics informed by Celtic emigrant romanticism.

By the time Nick Cave sat down beside MacGowan, who made his appearance during the finale, and the pair sang ‘Summer In Siam’, and are joined by every member of the cast and the President, there are tears around the room. A spontaneous Happy Birthday leads the frail MacGowan to respond in kind with ‘The Wild Mountain Thyme’.

The National Concert Hall has never seen the likes of it. And likely neither shall we.

What a night ! ❤️ #shane60 #damiendempsey