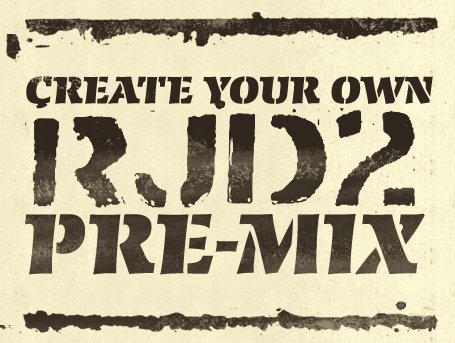 RJD2 has an interesting competiton going at the moment over at iMeem. Seeing as his The Third Hand record is not out yet, the idea is to give you the original samples that made up the songs on the album and let you fuck about with it. So seeing as you shouldn’t have heard *most* of the album yet you can approach it the remix from a creatively unique state of mind and hopefully make something that won’t resemble the original at all.

when you do these remix things, you also are working with the original song in the back of your head. cause youve already heard the song. the only way around this would be if the song hadnt been released yet….i thought it would be informative to producers to be able to work with a group of sounds WITHOUT the preconceived notion of them coming from a song they already know, but then be able to hear the song AFTER they got to mess with it. at some point, were all just gonna be dirt in the ground, so if somebody can get something out of some info youre sitting on, why hoard it? at least thats how i see it.

The samples and more info are here.

Edan and the Beat