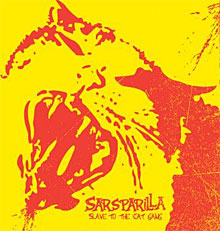 Four Tet – Much Love to the Plastic People mix

Damien Lynch aka Sarsparilla’s last album Karahee was one of 2007’s best Irish albums in the electronic vein and the followup Slave to the Cat Gang has just been released on Alphabet Set.

It’s a 10 song collection of electro boom-synth/ drum machine electronic music that is heavily-inspired by the soundtrack of John Carpenter ’80s films. So obviously, it’s awesome if you’ve ever digged those halogen-lit dark night horror robo-zombie cop movies or The Thing or Halloween or creepy movie soundtracks and old school electronica in general.

A video for older track ‘The Count’ is beyond the jump.