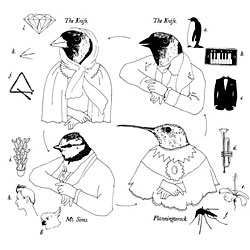 Sarsparilla – Slave to the Cat Gang

Taken from the studio version of the band’s Darwinian Opera Tomorrow, In A Year out on March 1st, comes this free download which was made available to all mailing list subscribers today.

‘Colouring of Pigeons’ is an 11 minute frequently-discordant opus featuring operatic squalls, much percussion and Karin’s unique voice along with Kristina Wahlin Momme and Lærke Bo Winther. The whole project was a collaboration with Planningtorock and Mt. Sims. For the project, Karin and Olof researched Darwin literature and opera in general;seeing as they had no idea about it beforehand. Olof even attended a field recording workshop in the Amazon to record sounds.

MP3: The Knife – Colouring of Pigeons

More info here. Tracklisting and a live video from the show in the full post.

At first it was very difficult as we really didn’t know anything about opera. We’d never been to one. I didn’t even know what the word libretto meant. But after some studying, and just getting used to opera’s essence of pretentious and dramatic gestures, I found that there is a lot to learn and play with. In fact, our ignorance gave us a positive respectless approach to making opera. It took me about a year to become emotionally moved by an opera singer and now I really do. I really like the basic theatrical values of opera and the easy way it brings forward a narrative. We’ve approached this before in The Knife but never in such a clear way.