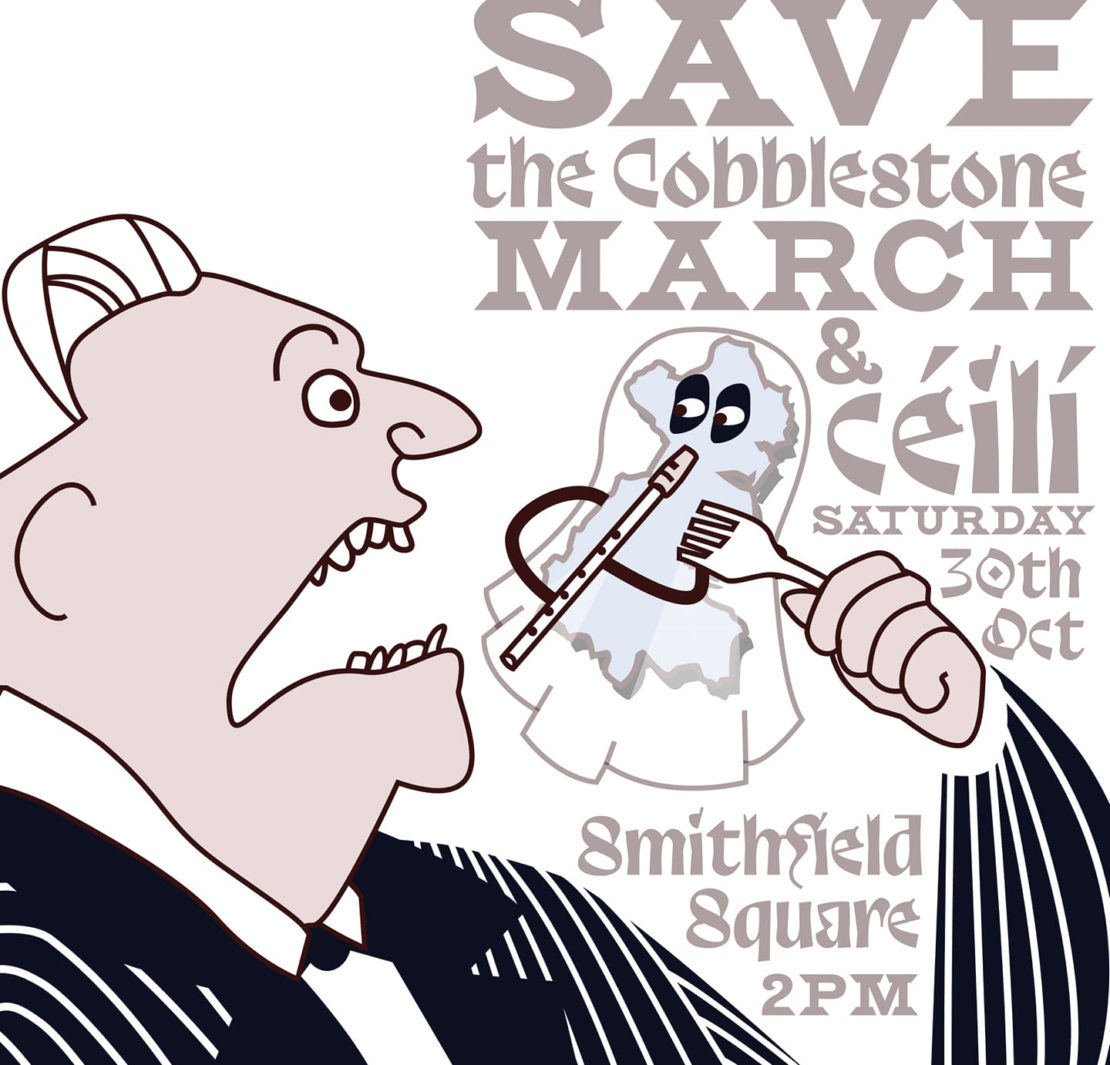 The best gigs & clubs nights in Dublin this Halloween week

After the recent protest around the squeezing out of cultural spaces prompted by The Cobblestone trad venue in Smithfield being earmarked for a hotel development, and while an Gardaí-assisted eviction was attempted on a derelict building around the corner on Prussia Street yesterday (in which the bailiffs destroyed the property), Dublin is Dying is a new organisation who are putting on a march and céilí this Saturday at 2pm at Smithfield Square to further highlight the issue.

The group have issued a statement around it:

In times of emergency, Culture is the first to go and the last to return. At a time when the culture of our society is already vulnerable, a building proposal has appeared which spits in the face of artists whose traditions and ways of living are already on life support…

Recently outrage has erupted in Dublin. The Cobblestone, a pub celebrated world-wide for its traditional Irish music is proposed to be, in part, demolished in favour of erecting a multi-storey hotel. Though the front bar would be maintained as a listed building, 70% of the current floorspace would be removed making it impossible for the pub to function as a business.

The venue at the back would be completely demolished, a place that hosts intergenerational singing sessions, traveller culture nights, affordable music and dance lessons and countless other events which no other single venue could hope to accommodate.

To follow through with this plan would spell the end for the Irish music community which has developed there over the past thirty years. To demonstrate their disapproval of the building proposal, the guts of a thousand people gathered together in Smithfield square on Saturday the 9th of October.

The city was completely taken by surprise. Gardaí were forced to quickly shut the quays of the Liffey to traffic as a coffin with “R.I.P. Dublin” written on its side was carried along the banks of the river to the steps of Dublin City Council. Among the crowd, musicians played ancient marches, hundreds walked together solemnly, carrying musical instruments, banners and placards.

The event has sparked a hot debate in Dublin. Power based ideologies have long been placed above the more humane values of society. The inherent value of culture and tradition have once more been called into question.

The same unfettered greed and short-sighted planning that has created the housing crisis in Dublin has continually encroached on sites of culture but the people of Dublin have had enough. Now they are saying: “No!” Something has to change.

Before the identity of this city is entirely erased, cemented over by more mindless development, transformed into a corporate playground, we assert our right to protest, to demand a better solution.

Dublin is dying, but it’s not dead yet.

The second demonstration is to be held on the 30th of October, 2pm, at Smithfield Square, Dublin. The Dublin is Dying group intend to stage a Céilí on O’Connell Bridge and encourage people to submit objections to Dublin City Council before the submission deadline on November the 4th. There will be live traditional Irish music and we invite all to come and dance or listen to the sound of Irish Culture.

Journal article on destruction of the city

Petition to save the Cobblestone

Campaigners say Cobblestone Pub will be ‘swallowed up’ by hotel development (irishtimes.com)

The best gigs & clubs nights in Dublin this Halloween week